Leaving behind the failed attempt at merging with its closest competitor, Halliburton (NYSE:HAL), Baker Hughes (NYSE:BHI) had decided to deal with the ongoing commodity slump all by itself in the second quarter of 2016. For this, the world’s third largest oilfield services company devised a three-point strategy aimed at improving its operational efficiency, innovating its product line, and optimizing its capital structure. While the Houston-based company successfully delivered on its strategy for two quarters, it received an offer in the fourth quarter to merge its operations with the oil and gas division of General Electric (NYSE:GE) to form an industry leading oilfield technology provider with a unique mix of service and equipment capabilities. 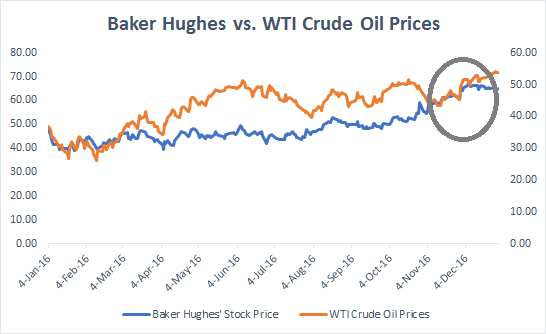 Post the announcement of the news, Baker Hughes’ stock declined almost 4% in a single trading day. However, the company quickly recovered, primarily on the back of the Organization of Petroleum Exporting Countries’ (OPEC) decision to cut its cumulative oil output by 1.2 million barrels per day (Mbpd). This caused the WTI crude oil prices to increase from an average of $44.85 per barrel in the September quarter to $49.21 per barrel in the December quarter, representing a rise of almost 10% in the last three months. In turn, the global rig count also rose sharply during the quarter. The global oil and gas rig count grew from 1,578 units at the end of the third quarter to 1,772 units at the end of the fourth quarter. 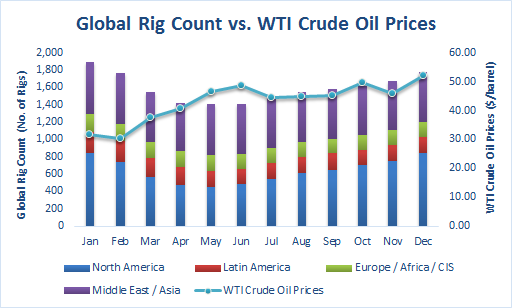 Yet, the oilfield contractor’s 4Q revenue is likely to remain weak, given the time lag between the recovery of commodity prices and the rise in demand for drilling rigs. However, the market believes that the company’s cost reduction measures and efforts to optimize its balance sheet, coupled with the improved sentiment for commodity prices, will drive its earnings in the December quarter. The company is set to release its fourth quarter and full year 2016 results on the 26th of January 2017 [1]

Overall, we believe that the year 2016 was a good one for Baker Hughes with the announcement of the GE deal. The deal seems to be promising for the shareholders, and could enable the company to recover from the commodity down-cycle faster than expected. However, since the completion of the transaction is subject to regulatory approvals, it is expected to close only by mid-2017. Thus, the company still has a couple of quarters to operate on a standalone basis before it merges with GE.