Contrary to market expectations, Baker Hughes (NYSE:BHI), the world’s third largest oilfield services company, posted weak December quarter and full year 2016 earnings last week((Baker Hughes Announces Fourth Quarter 2016 Results, 26th January 2017, www.bakerhughes.com)), despite the strong rebound in commodity markets over the last few months. Unlike its peers – Schlumberger and Halliburton – who reported a solid recovery in their performance for the quarter, the Houston-based company missed the quarterly as well as annual consensus estimate for earnings by a fairly large margin, primarily due to the postponement of projects in the UK and weak activity in the North Sea and Brazil. However, in line with its contemporaries, the oilfield service provider also foresees a further improvement in the North American markets in the coming quarters, while it expects the international markets to remain soft for the most part of 2017.

Even with the huge earnings miss, the fourth quarter of 2016 turned out to be a comeback quarter for Baker Hughes, as the company saw an increase in its top-line, for the first time in the last two years. Consequently, the company’s stock price, that had dropped almost 3% within hours of the announcement of the lower earnings, recovered back sharply by the end of day, as the investors gave the company some credit for reporting its first sequential revenue growth after eight quarters, seeing it as a sign of revival for the company. The oilfield contractor’s 4Q’16 revenue stood at $2.4 billion, 2% higher on a sequential basis due to the improved drilling conditions in North America and the Middle East, and higher-than-expected seasonal product sales. However, this rise was partially offset by the lower activity in the North Sea, labor union strikes and weather delays in Norway, and project postponements in the UK. 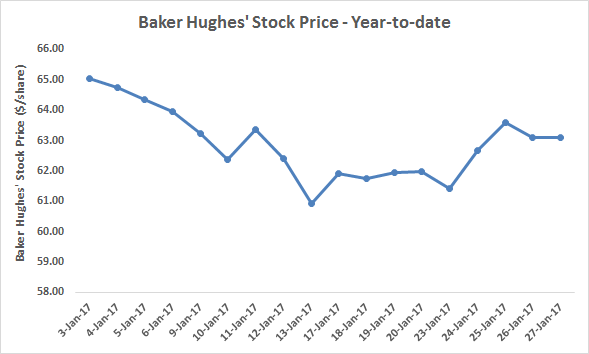 In terms of profitability, Baker Hughes showed an improvement as its cost reduction efforts reaped solid results. The company reported an operating loss of $173 million in the latest quarter, versus a loss of $321 million and $1.4 billion in the September quarter of 2016, and December quarter of 2015 respectively. That said, the oilfield contractor booked a one-time loss on the sale of a business interest and a tax expense (as opposed as to a tax benefit), which dragged down its net earnings for the quarter. On an adjusted basis, Baker Hughes recorded a loss of 30 cents, missing the analyst estimate by almost 19 cents. 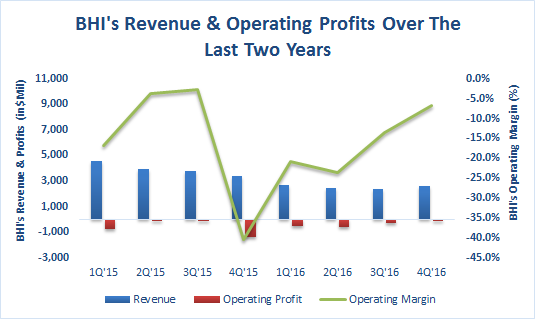 However, Baker Hughes has been proactive in managing in the ongoing commodity downturn, and has made significant progress in meeting the targets set under its three-point strategy announced in May 2016. The US-based company achieved nearly $700 million in annualized cost savings by the end of 2016, as opposed to its objective of $500 million, exceeding its initial goal by almost 40%. Further, the company optimized its capital structure by reducing its long term debt obligations by $1 billion, and repurchasing more than $750 million in shares, until the announcement of the proposed merger with General Electric (NYSE:GE) in October. Despite this, the oilfield provider ended the year with $4.6 billion in cash, almost double the $2.3 billion of cash at the end of 2015.

Lastly, in terms of the product innovation, Baker Hughes accelerated its innovation program, and introduced nearly 70 new products in the last six months of 2016. The company also built several new sales channels for its products and technology, and leveraged its differentiated technological expertise to win multi-year contracts in the North Sea, Gulf of Mexico (GOM), and Brazil. Since the company has exceeded its targets under the new strategy, we expect the company to stick with this strategy, at least until the GE merger takes shape.

As a update on the GE oil and gas deal, Baker Hughes’ management seemed quite enthusiastic about the merger, that was announced in October 2016. The company reiterated the strategic relevance of the deal, given the complementary business lines, similar cultures of innovation, and industry leading capacities of the two companies. According to the company, the regulatory review process is progressing as planned, and the deal is expected to close by mid-2017.

Since the outlook for commodity prices has improved, Baker Hughes anticipates the North American onshore drilling activities to ramp up in 2017, giving a boost to its revenues in the coming quarters. However, the international markets are expected to remain weak due to sluggish drilling demand and continued pricing pressure. The offshore markets, particularly deepwater, are likely to be hit even harder in the next few quarters.

Keeping the volatility of the commodity markets in mind, Baker Hughes plans to focus on product innovation, and aggressively identify revenue opportunities for its products and technology, while controlling its operating costs to sustain its profitability. Further, the oilfield services company will continue to optimize its capital structure to enhance its shareholder returns until it finally merges with the oil and gas operations of GE.