Despite the surge in the global drilling demand in the last three months, Baker Hughes (NYSE:BHI), the world’s third largest oilfield services company, is expected to report a weak financial performance for its March quarter of 2017 on 25th April 2017((Baker Hughes Announces March Quarter 2017 Results, 21st March 2017, www.bakerhughes.com)). While the company’s profits are likely to higher, both on a sequential as well as annual basis, the analysts anticipate the company’s 1Q’17 earnings to remain negative. This is largely because of Baker Hughes’ inability to efficiently cope with the persistent pricing pressure in the industry, unlike its closest rival, Halliburton, who made a strong comeback by returning to positive earnings in the second half of 2016.

That said, the company has accelerated its innovation program, and introduced a number of new products in the last quarter to leverage its differentiated technological expertise to weather the current commodity slump. Furthermore, Baker Hughes is progressing well towards completing its merger with General Electric (NYSE:GE), which will create a new company equipped to provide best-in-class physical and digital technology solutions to its customers.

The production cuts imposed by the members of the Organization of Petroleum Exporting Countries (OPEC) in the first quarter led to a sudden surge in crude oil prices. In fact, oil prices traded between $50-$55 per barrel for the first two months of the year, before falling under the $50-per-barrel mark again in March after the US inventory and production compensated for the decline in OPEC oil supply. However, the volatility in oil prices did not hamper the recovery in the global drilling demand. This is evident from the fact that the global rig count grew sharply from 1,772 units at the beginning of the year to 1,985 units at the end of the first quarter. While the rebound in drilling demand is likely to improve Baker Hughes’ top-line, we expect it to be offset by the company’s inability to gain new contracts at attractive rates during the quarter.

In March 2017, the US Department of Justice (US DOJ) requested Baker Hughes and GE to furnish additional information in connection with the proposed deal between the two companies. Since second requests, such as these, are considered to be a part of the DOJ review, the two companies continue to work closely with the government body to speed up the review process. However, this request is likely to push the closure of the deal by roughly 30 days. Although, Baker Hughes and GE continue to be optimistic about the deal and expect the transaction to close by mid-2017, subject to shareholder approval and other regulatory requirements. (Also read: Does The GE Deal Make Sense For Baker Hughes’ Shareholders?)

As mentioned earlier, Baker Hughes is concentrating on enhancing its product portfolio by introducing new, innovative solutions that will not only reinforce its technological dominance in the industry but can also enable it to remain afloat in the ongoing commodity trough. For this, the company joined hands with Saudi Aramco and announced the first installation of the TransCoil rigless-deployed electrical submersible pumping (ESP) system. This system is designed to allow operators to improve their well productivity and reduce the costs associated with installing and replacing ESPs.

In addition to this, Baker Hughes also launched its TerrAdapt adaptive drill bit, which is capable of delivering notable cost savings through the use of automation. This will be the industry’s first self-adjusting depth-of-cut (DOC) control elements, which will adjust drilling based on the formation of the field, and result in faster, more consistent rates of penetration (ROP), and significantly reduced non-productive time and cost for the operators. While these innovative products could result in reduced costs for the operators, it remains to be seen if Baker Hughes will be able to pitch these new products to its customers at attractive rates, and boost its profits. 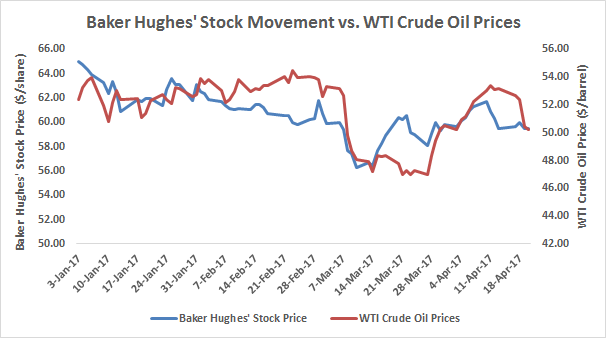