The year 2016 has been an extremely eventful one for Baker Hughes (NYSE:BHI). The company experienced its share of ups and downs through the year, with commodity prices moving from under $26 per barrel in the first quarter of the year to around $55 per barrel in the current quarter. But, the oilfield service provider managed to end the year on a happy note with the announcement of its merger with General Electric Company‘s (NYSE:GE) oil and gas operations to form a new mammoth with a pro-forma revenue of $32 billion. Further, the Organization of Petroleum Exporting Countries’ (OPEC) decision to restrict its cumulative oil production at 32.5 million barrels of oil per day (Mbpd), brought cheer for the company and its investors. In fact, the Houston-based company’s stock has jumped more than 42% since the beginning of the year on the back of these two major announcements. In this note, we briefly discuss the key highlights of 2016 for Baker Hughes. 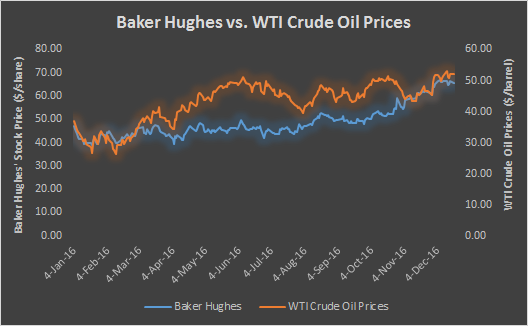 Calling Off The Merger With Halliburton

The year began on a scary note for Baker Hughes with crude oil prices plummeting to multi-year lows of around $26 per barrel, resulting in rapid sell-off of the company’s stock. Since this led to a severe disruption in the valuation of oil and gas companies, the much-hyped and much-awaited merger between Halliburton and Baker Hughes, the world’s second and third largest oilfield service company respectively, became commercially unviable for the two companies. Hence, the deal did not come through, and was officially called off in May 2016. However, it worked in Baker Hughes’ favor since the company received a sum of $3.5 billion from Halliburton, as a termination fee for not completing the deal, which helped improve the company’s deteriorating cash flow position.

With the cancellation of the transaction with Halliburton, Baker Hughes realized that it had to deal with the commodity slowdown all by itself. Thus, without wasting much time, the Houston-based company devised a three-point strategy to manage its deteriorating financial condition. As part of this strategy, the oilfield service provider aimed to improve its operational efficiency, focus on innovating its product line and offer a full-service model, and optimize its capital structure. Below is a summary of the company’s strategy for the year and its corresponding targets under each category. 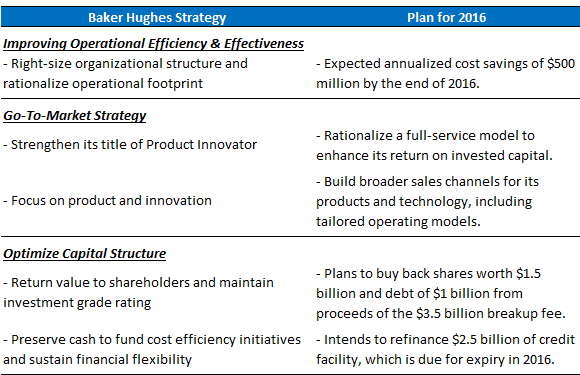 While Baker Hughes successfully delivered on its strategy for two quarters, the company announced its plan to merge with GE’s oil and gas operations to form an industry leading oilfield technology provider with a unique mix of service and equipment capabilities. The deal will result in the formation of a “New” Baker Hughes that will be equipped to provide best-in-class physical and digital technology solutions to its customers, given the technological expertise from GE and exceptional oilfield services’ capabilities from the former Baker Hughes.

As part of the deal, Baker Hughes shareholders will receive a special one-time cash dividend of $17.50 per share, or a total sum of $7.4 billion, post the completion of the deal. Also, these shareholders will own 37.5% of the new company, while the remaining 62.5% will be held by GE shareholders. Besides this, the deal is likely to bring about significant revenue as well as cost synergies. As per the company guidance, the transaction will result in cost synergies of $1.2 billion and revenue synergies of $0.4 billion by 2020. The transaction is expected to close in mid-2017, which implies that these synergies would start flowing from 2018 onward. 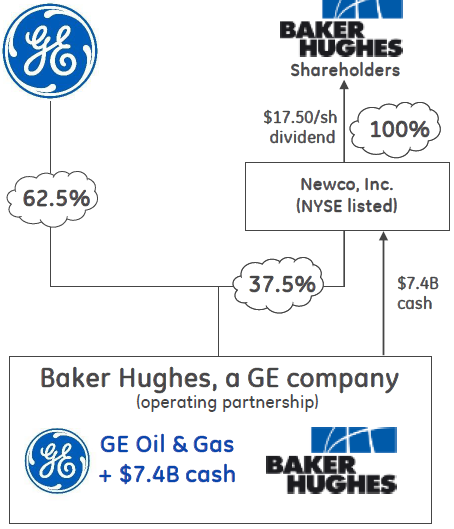 Considering the initial estimates provided by the two companies, we believe that Baker Hughes shareholders will enjoy an incremental value of roughly $5.6 billion, or $13.20 per share from this deal (For Further Details Read: Does The GE Deal Make Sense For Baker Hughes’ Shareholders?). This appears to be a good deal for Baker Hughes’ shareholders, since they will continue to hold a position in the new company, and will be a part of the company’s future growth. Moreover, in the current uncertain price environment, the partnership will allow Baker Hughes to utilize the technical knowledge from GE to strengthen its product offering and compete with its closest competitors, Halliburton and Schlumberger.

Thus, we believe that the year turned out to be a good one for Baker Hughes with the announcement of its deal with GE. The deal seems to be promising for the shareholders, and could enable the company to recover from the commodity downcycle faster than expected.