As opposed to market expectations, Baker Hughes (NYSE:BHI) reported a strong set of September quarter earnings on 25th October 2016 [1], causing its stock to shoot up by more than 4% post the announcement. While the oilfield contractor missed the consensus estimate for revenue due to lower drilling activity and pricing pressure, the company’s adjusted earnings showed a strong improvement owing to the consistent efforts to reduce its operating costs. However, the Houston-based company expects to witness continued pricing pressure in the fourth quarter, which is likely to weigh on its top line growth. 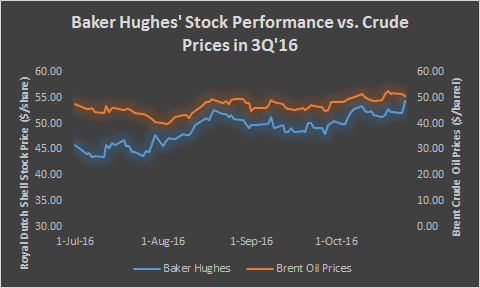 Given the recovery in the North American drilling markets, Baker Hughes experienced a sizebale improvement in its revenue from the region. However, the increase in the US onshore activity and seasonal uptick from Canada was almost entirely offset by the sluggish activity in the Gulf of Mexico. As a result, the oilfield contractor’s North American revenue saw only a marginal growth during the quarter. Further, the international markets, particularly Europe and Africa, reported softness in drilling demand, offsetting the notable improvement in the Latin American markets. Consequently, the world’s third largest oilfield company’s revenue for the quarter dropped to $2.35 billion, nearly 38% lower compared to the same quarter last year and around 2% lower than the previous quarter of this year.

After calling off the much hyped merger with its closest rival, Halliburton (NYSE:HAL), earlier this year due to the inability to obtain regulatory approvals, Baker Hughes had set a target to bring down its operating costs by $500 million on an annualized basis under its three-point strategy devised to put the company back on the track of profitability. (Read: How Does Baker Hughes Plan To Deal With The Ongoing Commodity Slump?). However, in the third quarter, the company managed to reduce its operating costs by more than $1 billion, representing a decline of more than 35% sequentially and almost 40% annually.

This implied that the company had realized the cost savings ahead of its schedule, causing its earnings to improve drastically on a sequential basis, despite a decline in its revenue for the quarter. The oilfield service provider generated pre-tax profit of $78 million in the latest quarter, as opposed to a loss of almost $1 billion in the previous quarter. While this profit is still 33% below that of the last year, it is a great comeback for the company that had been struggling to remain profitable in the commodity slump. This also means that the company is on the right path and its efforts are bearing fruit. Consequently, Baker Hughes now expects to realize annualized cost savings of $650 million by the end of 2016, a 30% increase from its previous target. 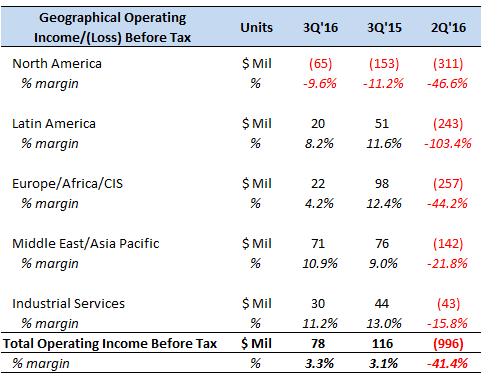 Apart from showing improvement in its earnings, Baker Hughes has also made efficient use of the termination fees of $3.5 billion that it received in the last quarter from Halliburton for the cancellation of the merger. The company has repaid $1.1 billion of its long-term debt in the last nine months, bringing down its debt obligations by more than 25%. Also, unlike most of its competitors, the company continued to repurchase its own stock, reiterating the company’s confidence in its stock. In addition, Baker Hughes has maintained its dividend, while restricting its capital spending during the quarter. This has enabled the company to improve its cash flows from operations for the nine months ended in September to $3.6 billion, almost triple that of the cash flows in the same period last year.

Even though Baker Hughes posted a stark improvement in its results in the third quarter, it foresees a tough fourth quarter. While the North American markets have shown signs of recovery, the company anticipates pricing pressure to prevail in the December quarter. Moreover, the US-based company expects to see a drop in the international drilling activity in the next few quarters due to restrictive spending by exploration and production (E&P) companies. In particular, the company’s deepwater positions in the African markets are likely to witness a further contraction. In addition, the local strikes in Norway in October are expected to weigh on the company’s fourth quarter results. However, the management sees growth opportunities in Kuwait, the United Arab Emirates, India, and Oman in the near term, which could partially mitigate the negative impact of other weaker markets.

Overall, the company highlighted that North American land drilling demand is likely to be dominated by large and more established E&P players going forward, rather than smaller and less established ones. Thus, despite the growing optimism about the recovery in the commodity markets, Baker Hughes expects the recovery in the North American markets to be gradual as the customers will continue to be cautious of the volatility in commodity markets. Also, the oilfield contractor emphasized the importance of crude oil prices becoming sticky at the mid-to-upper $50 per barrel mark to facilitate a sustainable recovery in the North American markets.