After a failed acquisition attempt by Halliburton (NYSE:HAL), Baker Hughes (NYSE:BHI) is now set to merge with the oil and gas division of General Electric Company (NYSE:GE), a US-based digital industry company. The two companies had announced earlier this month about their plans to merge their operations to form an industry leading oilfield technology provider, which would be able to offer best-in-class physical and digital technology solutions to its customers [1]. Under the arrangement, Baker Hughes will transfer all its assets and liabilities to form a new company – “New” Baker Hughes – where its shareholders will hold 37.5% ownership. Further, GE will transfer its oil and gas operations to this newly formed company, along with a sum of $7.4 billion, which will be paid out to Baker Hughes shareholders as a one-time special dividend of $17.50 per share. According to our estimates, New Baker Hughes will have a total value of $63.4 billion. Below, we present our calculations and rationale for the same.

Firstly, we determine the equity value of Baker Hughes and GE’s Oil and Gas division, based on their respective EV/EBITDA multiples (estimated) for 2018, excluding the impact of the deal. Based on our crude oil forecast for the next few years, we anticipate Baker Hughes’ profitability to improve back to its pre-2014 levels. In line with this, we estimate its EBITDA margin to grow to 18.8% by 2018 from around 8.3% in 2016 (estimated). Accordingly, we expect the oilfield services provider’s equity value to be roughly $25.6 billion. On similar lines, we believe that GE’s oil and gas operations are worth $23.7 billion, without considering the impact of this merger. 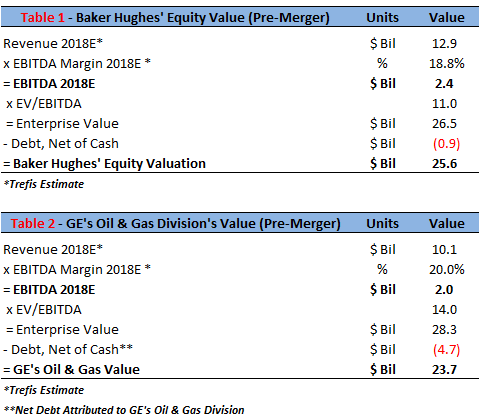 In addition to this, the deal is likely to realize significant revenue as well as cost synergies due to the complementary nature of the businesses. According to the initial estimates by the two companies, the transaction will result in cost synergies of $1.2 billion and revenue synergies of $0.4 billion by 2020. Even though, the transaction is expected to close in mid 2017, we expect some of these synergies to be realized beginning 2018. Accordingly, we determine that the present value of the combined synergies from the deal would be around $14.2 billion, assuming a weighted average cost of capital (WACC) of 8.6%. 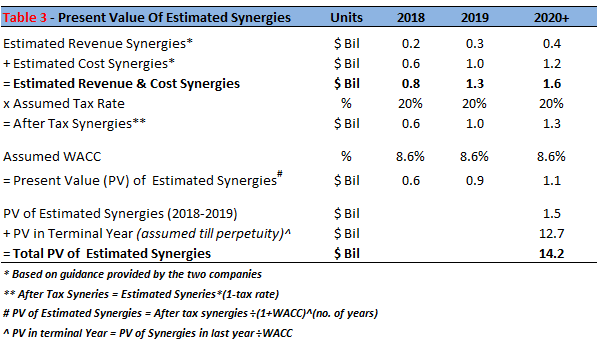 Thus, we arrive at a cumulative value of $63.4 billion for the new merged company. However, the value could vary depending on the value derived from the synergies from the transaction.