Dish Network (NASDAQ:DISH) reported its first quarter earnings recently. The company’s revenues grew 3.6% to $3.72 billion while net income came in at $351.5 million, or 76 cents per share, compared to a profit of $175.9 million, or 38 cent per share, in the prior year quarter. [1] The company lost 134,000 video customers and reported average revenue per user (ARPU) grew 4.4% to $86.01 for the quarter. [1] The company’s management expressed confidence that Dish’s streaming service Sling TV is well poised to take advantage as consumers increasingly shift to alternative platforms in order to consume content. The company management stated that their primary focus right now is to keep the service attractively priced in order to gain more subscribers.

The management also stated that they are currently weighing alternatives regarding how to suitably monetize their spectrum holdings. Dish has made significant investments in spectrum over the past few years and is now the fifth largest holder of wireless spectrum in the United States. Dish currently owns licenses to more than 80 Megahertz (MHz) of spectrum and we estimate the pre-tax fair value of Dish’s spectrum holdings to be around $39 billion. Dish can monetize its holdings in many different ways. The company can launch its own nationwide wireless network, partner with an existing wireless carrier and either lease or sell the spectrum.

Dish’s pay-TV operations contribute close to 30% of its value, according to our estimates. The business saw steady growth in the first three months of 2015, driven by higher ARPU. The subscriber-related revenues increased 3.7% to $3.69 billion during the quarter. [1] Pay-TV subscriber churn rate increased to 1.65% as compared to 1.42% during the prior year period. Dish lost 134,000 video customers during the quarter while it added 40,000 new subscribers during the same period a year ago. [1] The company attributed subscriber losses to service disruptions arising out of contract negotiations with TV programming suppliers.  The company’s subscriber base currently stands at 13.84 million. The pay-TV market is becoming increasingly saturated and pay-TV companies have lost thousands of customers over the past few years. The availability of content on online streaming platforms such as Netflix (NASDAQ:NFLX), Hulu, HBO Go etc., is encouraging traditional pay-TV subscribers to shift to such platforms. Accordingly, we believe that Dish will continue to lose pay-TV subscribers in the near term.

The ARPU for Dish’s pay-TV subscribers increased 4.4% in Q1 2015 as compared to Q1 2014. [1] We continue to believe that APRU will grow steadily in the coming years driven by periodic price increases. Programming costs rise each year due to a periodic increase in the carriage fee for various channels, which is a critical part of the multi-year agreements between media companies and pay-TV service providers. To protect margins, pay-TV companies typically increase prices periodically and pass on the burden of increased programming costs to subscribers. We expect this trend to continue and drive ARPU up.

Sling TV’s Base Package Will Remain At $20/Month

Dish’s management talked about their plans regarding Dish’s new streaming service Sling TV. The management indicated that they are satisfied with service’s base offering and will not be tinkering with it anytime soon. [2] Sling TV’s base package is priced at $20 per month and offers a good mix of popular sports channels such as ESPN and ESPN2, as well as entertainment channels such as AMC, TNT, Disney Channel, Cartoon Network/Adult Swim, etc. [3] The management feels that the streaming service is well stacked with content and isn’t lacking any particular content provider that could potentially hinder its success. The management is more focused on keeping the pricing attractive for now. Subscribers do have the option of adding more content to their package as the service offers various paid add-ons. CEO Charlie Ergen also touched upon the importance of ESPN to the service, stating that “it would be difficult to do any kind of bundle without ESPN.”

Sling was made available to all U.S. subscribers in February and the service witnessed encouraging adoption, registering at least 100,000 sign-ups in its first month. [4] (Related – Dish’s Sling TV Off To A Good Start, But Worries Remain) Sling is primarily targeted at the 10.6 million broadband-only subscribers in the U.S. [5] The service aims at providing a smaller selection of live TV channels at a cheaper price in comparison to more expensive cable TV subscriptions. However, the service is still priced considerably higher in comparison to certain other streaming services such as the service from Netflix (NASDAQ:NFLX). Netflix is the largest streaming video provider in the U.S., with over 40 million subscribers, and has priced its standard package at $8.99 a month. It will be interesting to see how much traction Sling TV gathers in the coming quarters among the demographic it is targeting. 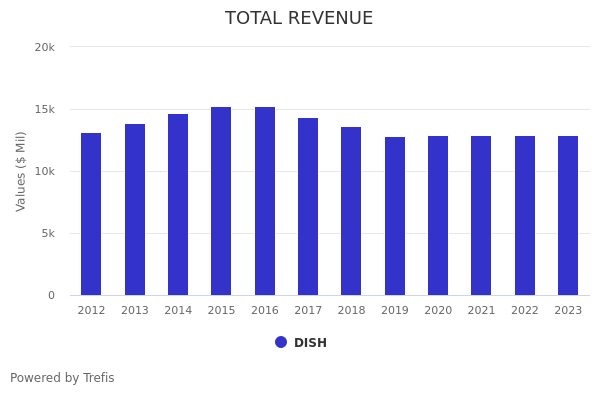