The stock price of satellite TV and wireless services provider Dish Network (NASDAQ:DISH) has declined by about 15% over the past month, compared to the S&P 500 which remains down by about 7% over the same period. With the Federal Reserve hiking interest rates at a more aggressive pace in order to combat soaring inflation, investors are prioritizing companies with less debt and strong cash flow growth. This broader market rotation is hurting Dish considerably, as the company has been investing meaningfully into building out its 5G wireless network while contending with higher than expected subscriber losses and declining revenue at its core pay-TV business. For perspective, over Q1, the company’s CapEx stood at $896 million, while it burned a net of about $191 million in cash over the quarter. Dish is also highly leveraged with about $21 billion in total debt, translating into a debt to EBITDA multiple of 5x.  The company has large impending debt payments including $2 billion maturing in mid-July and another $1.5 billion maturing in March 2023. This could require the company to raise additional capital and this could be expensive in a tightening monetary environment.

However, with the recent sell-off, Dish stock now remains down by almost 45% year-to-date. Does this make the stock worth a look?  While there are clearly multiple risks for the company in the near term, much of this is probably priced in. Following the decline, Dish stock trades at just about 7x forward earnings. Although earnings are on the decline, they could eventually recover as Dish monetizes its new 5G network, which is being built using open RAN technology. Moreover, Dish’s spectrum assets could provide investors with considerable downside protection. The company holds around 150 MHz of sub-6 GHz frequency, compared to Verizon and AT&T which hold around 290 MHz each, per investment bank UBS. Although there are regulations that prevent existing wireless players from buying Dish’s spectrum before 2026, the asset is nevertheless increasingly valuable given the growing demand for bandwidth, the higher spectrum intensity of 5G versus prior technologies, and also due to the limited availability of airwaves.

We value Dish Network stock at about $38 per share, marking a considerable upside from the current market price. See our analysis on Dish Network Valuation: Expensive Or Cheap for more details. 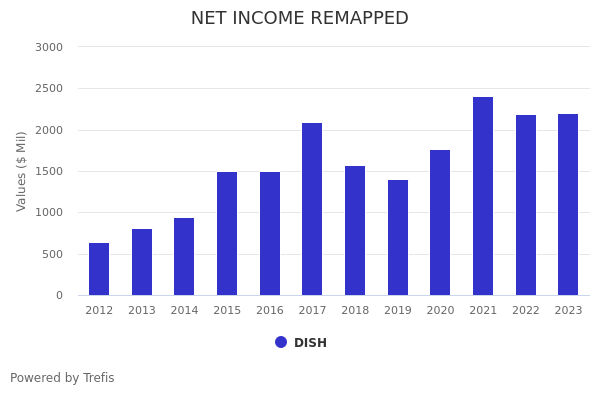 DISH Network During 2008 Recession vs. Now: DISH Stock Has 143% Upside If It Recovers To Pre-Covid Levels

What’s Next For Dish Network Stock?