Storage systems vendors have observed a decline in revenues due to a slowdown in hardware sales over the last couple of years. As a result, prominent vendors such as EMC (NYSE:EMC, NetApp (NASDAQ:NTAP), IBM (NYSE:IBM), Hitachi Data Systems and HP Enterprise (NYSE:HPE) have seen weakness in storage revenues. Moreover, the declines reported by these vendors has been greater than the industry-wide declines, since these sellers are increasingly facing competition from smaller vendors and flash-storage startups.

Over the last six to eight quarters, customer preference has been shifting to low-cost original design manufacturer (ODM) storage boxes, which is cutting into the addressable market for large vendors. [1] [2] EMC’s share in the storage systems market declined from 31.3% in 2013 to under 30% in 2015, as its revenues declined at a CAGR of almost 4% compared to the industry-wide decline of 1% in the same period. 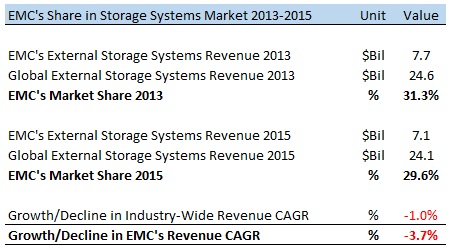 The trend continued in the March quarter this year, as EMC reported an 8% year-over-year decline in combined product revenues for the quarter. According to the Q1 performance of storage systems vendors compiled by IDC, EMC’s share in the market stood at 24.9% as its revenue declined by nearly 12% on a y-o-y basis. [3] The March quarter was the first quarter for which IDC reported a year-over-year decline in total capacity shipments – a 4% decline to 27.8 exabytes shipped through the quarter.

We forecast EMC’s storage hardware revenue to decline at a CAGR of 2% over the next few years, which would negatively impact its share in the market. Despite the likely decline, EMC’s share in the market will likely remain significantly higher than its competitors. NetApp, HPE and IBM all have 8-11% market shares. 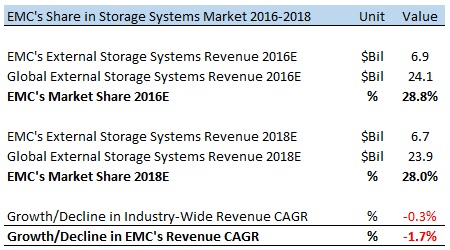 1) The purpose of these analyses is to help readers focus on a few important things. We hope such lean communication sparks thinking, and encourages readers to comment and ask questions on the comment section, or email content@trefis.com
2) Figures mentioned are approximate values to help our readers remember the key concepts more intuitively. For precise figures, please refer to  Our Full Analysis For EMC.