EMC (NYSE:EMC) is scheduled to announce its second quarter earnings on Monday, July 18. [1] Over the last couple of years, EMC has witnessed a slowdown in its core information storage business, with its subsidiary VMware (NYSE:VMW) driving much of the growth. The net revenues generated by EMC’s information infrastructure segment, which includes product and services revenues for storage hardware, content management and information security, fell by 6% on a y-o-y basis to $3.4 billion through March quarter. On the other hand, the combined revenues of VMware and Pivotal were up almost 7% to $1.7 billion in the same period. The trend is expected to continue through the June quarter given the weak global spending on storage hardware. [2] The company has not provided any guidance for 2016 due to the pending acquisition by Dell, which is likely to be completed by Q3 this year. [3]

Top-line growth within EMC was observed for services rather than product sales. Combined product sales were down by 8% on a y-o-y basis through the March quarter, while combined services revenues were up by 3% on an annual basis. Pivotal has been the fastest growing revenue stream for EMC – a trend likely to continue over the next few quarters. 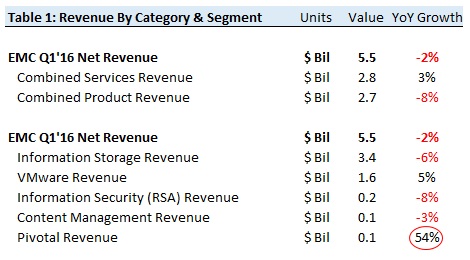 According to IDC-reported data, EMC’s share in the storage systems market has fallen considerably over the last couple of years, a trend consistent across most large storage vendors, including NetApp (NASDAQ:NTAP), IBM (NYSE:IBM), Hitachi Data Systems and HP Enterprise (NYSE:HPE). EMC’s share in the market stood at 24.9%, roughly 5 percentage points over early 2015 levels. EMC’s revenue decline in the March quarter this year outpaced the industry-wide decline. 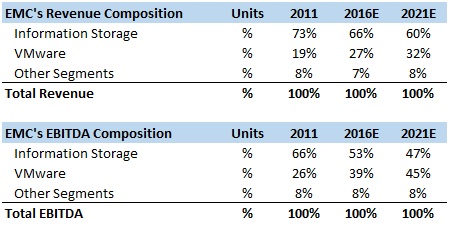 1) The purpose of these analyses is to help readers focus on a few important things. We hope such lean communication sparks thinking, and encourages readers to comment and ask questions on the comment section, or email content@trefis.com
2) Figures mentioned are approximate values to help our readers remember the key concepts more intuitively. For precise figures, please refer to  Our Full Analysis For EMC.

How A Worldwide Decline In Storage Systems Sales Impacts EMC