Storage giant EMC (NYSE:EMC) has reported 5% annual growth in net revenues from 2012 through 2015. However, the global slowdown in hardware expenditures resulted in low selling prices for hardware products, which in turn led to a decline in margins. As a result, EMC’s adjusted gross profit increased by only 3% annually during the same period. Furthermore, a decline in profit margins for EMC drove its net income to decline at a CAGR of 2% from 2012 through 2015. Despite the decline in its net income, EMC’s earnings per share (EPS) was up by 2% on a year-over-year basis. 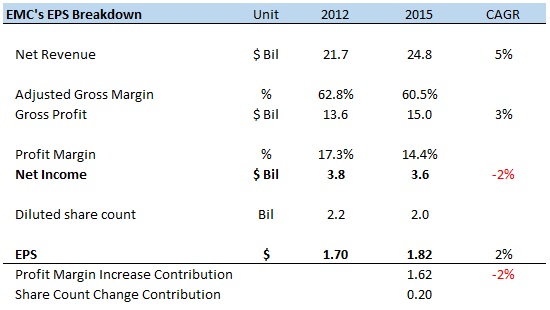 The increase in EPS was attributable to share repurchases, rather than reflecting actual growth, as evidenced in the table above. EMC’s diluted earnings per share would have fallen by 2% on a y-o-y basis from 2012 through 2015 – in line with its overall earnings – had there been no share repurchases in that period.

This growth in EPS, therefore, is somewhat deceptive and unlikely to be sustainable in the future. If the trend of margin pressure continues through 2016, EMC’s diluted EPS for the year (base case in the table above) would be $1.79 or about 2% lower on a y-o-y basis. We forecast EMC’s EPS to be around $1.75, owing to a steeper impact of declining storage hardware revenues. Comparatively, Reuters’ consensus estimates EMC’s full year EPS to stand at $1.80, which is a 1% year-over-year decline.

How A Worldwide Decline In Storage Systems Sales Impacts EMC