Verizon Communication (NYSE:VZ) announced on Monday that an agreement had been reached for it to acquire Yahoo’s core operating busiensses for $4.83 billion. [1] While the deal would include Yahoo’s real estate assets, its valuable Excalibur patents (estimated to be worth over$1 billion) are not  included in the deal and can be sold separately later. Yahoo will change its name and will now become a publicly traded investments company that has stake in Alibaba, Yahoo Japan and other investments.

This ends the long drawn auction process for the struggling Internet company. With the completion of the acquisition, Yahoo’s internet business will be merged with Verizon’s AOL. This acquisition gives Verizon the necessary scale to launch its digital products as Yahoo’s properties had over a billion users. Furthermore, Yahoo’s programmatic platform, which includes BrightRoll, can now be combined with AOL’s programmatic suite to compete with ad giants Google and Facebook.

According to Trefis’s estimates, Yahoo’s core internet properties have a fundamental value of $4.2 billion. The break up this valuation is as follows:

Based on 2015 results, Trefis estimates Yahoo’s EV/EBITDA multiple (for its internet business) was 3.8x. 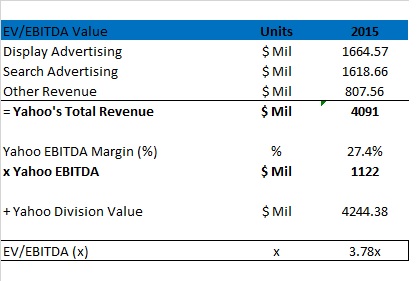 While this multiple was much lower than the industry average that is historically at 4.5x for mature internet advertising companies, Verizon is buying the company at 4.3x multiple. Considering the fact that Yahoo’s core internet business has been suffering, Verizon was able to acquire the internet business at a fair value.  At Yahoo, both revenues and profits have declined in the last few years.  Moreover, it has some pending liabilities, such as Yahoo’s agreement with Mozilla that mandates that new owner of Yahoo’s internet business will have to pay Mozilla $375 million till 2019.

Have more questions about Yahoo? See the links below:

1) The purpose of these analyses is to help readers focus on a few important things. We hope such lean communication sparks thinking, and encourages readers to comment and ask questions on the comment section, or email content@trefis.com
2) Figures mentioned are approximate values to help our readers remember the key concepts more intuitively. For precise figures, please refer to our complete analysis for Yahoo
Interactive Institutional Research (Powered by Trefis):

Should Verizon Continue To Pursue The Yahoo Deal?

Will Yahoo View Improve Topline For Verizon’s Yahoo Properties In the Future?