Over the last few years, JetBlue Corporation (NYSE:JBLU) has done phenomenally well. Its top line, in the period between 2010-2015, has grown by an average of 11.8%, the fastest in the industry. With the Alaska-Virgin America merger, the carrier was the fifth largest airline in terms of number of passengers. JetBlue established its brand by being economical and yet offering amenities like in-flight entertainment, TV at every seat, and Sirius XM satellite radio, which are not available at other low-cost carriers such as Spirit. Furthermore, in 2013 it launched its premium seating program, Mint, to entice business class or first class customers to its airline. The Mint program, with its lie-flat seats, and moveable partitions that can create small suites on the airplane, proved to be immensely successful, marking a cornerstone in JetBlue’s history.

In the following note, we compare JetBlue’s year to date performance, in terms of different metrics, to its peers in the industry.

JetBlue’s capacity growth in the last half decade has been the highest in the industry. Even as other players in the market focused on trimming the excess capacity built up in the system, due to excess investments in fleet, supported by the drop in oil prices, JetBlue continued to expand. It believed the headwinds in unit revenues to be systemic, and decided to wait it out, rather than cutting capacity. 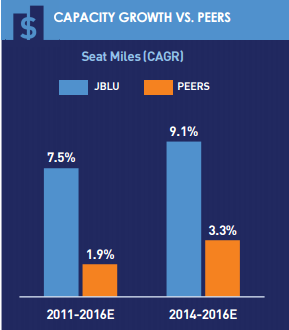 Despite all time high capacity growth, JetBlue continued to improve its occupancy rate, unlike most other airlines. The improvement in occupancy rate signifies the fact that the company didn’t have superfluous capacity in the system.

JetBlue, like its peers, faced a challenging year in terms of unit revenue growth. Unit revenues, or passenger revenue per average seat mile (PRASM), were under the pump throughout 2016 due to the strong dollar, low fuel prices, geopolitical turmoil, and increasing competition from low cost carriers. However, due to lower scale of its operations internationally and a great brand image, JetBlue didn’t suffer as much as other airlines from declining yields. Further, the unit revenues were helped by the launch of JetBlue’s operations in Mexico and Cuba. 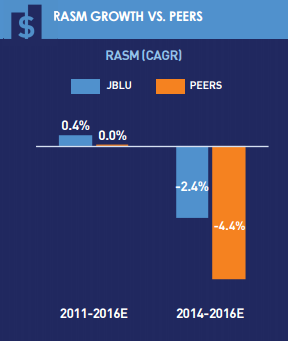 Given the recent ascension of oil prices, on the back of OPEC’s decision to cut production, it becomes imperative for the airline to be able to turn around its unit revenues.

JetBlue has successfully managed to keep a lid on its operating costs in the last few years. Although its costs were higher than peers in the period between 2011-2016, they were almost half in the last two years. This is likely attributable to the fact that JetBlue has managed to stay a low cost carrier. Its expenditure on wages has also grown organically, as it didn’t have to sign any new contracts with pilots. Furthermore, its sales and marketing expense, along with maintenance, has grown conservatively over the years. 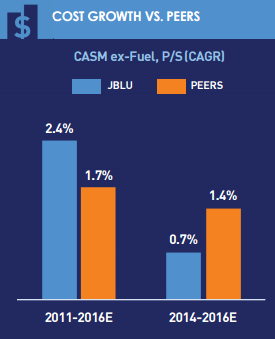 As the oil prices start rising again, and the company’s fuel expenditure goes up, this fiscal discipline will go a long way in promoting bottom line growth for the airline.

As a result of its performance exceeding its peers, in terms of unit revenues and costs, JetBlue managed to improve its pre-tax margin year on year. In 2016, the company expects the pre-tax margin to come in better than the other players in the industry.

Have more questions about JetBlue Corporation (NYSE:JBLU)? See the links below:

Company Of The Day: JetBlue

Will Odds Return In Favor Of JetBlue Airways Stock?

Will The Tide Turn For JetBlue Airways Stock?

Will The Momentum Continue In JetBlue Airways Stock?

JetBlue Stock: Should You Buy The Dip?