As industry overcapacity, real estate, and infrastructure sector slowdowns, drag down economic activity in China, vehicle sales have also slowed down this year, from the previously seen high growth levels in the world’s largest automotive market. The relatively weaker economic conditions have also caught up with the ever-so-growing luxury vehicle market in the country, with the likes of Audi–the highest-selling premium automaker in China, BMW, and Jaguar Land Rover (JLR) feeling the heat. However, Daimler AG‘s Mercedes-Benz seems to have continued on its solid growth course in the Far East.

We have a $96 price estimate for Daimler AG, which is slightly above the current market price.

The German automaker ranks third behind both Audi and BMW in terms of global volume sales, as well as sales in China–the second largest premium vehicle market, behind the U.S. However, Mercedes has narrowed its gap with its compatriots in the last year or two–both globally and in China. 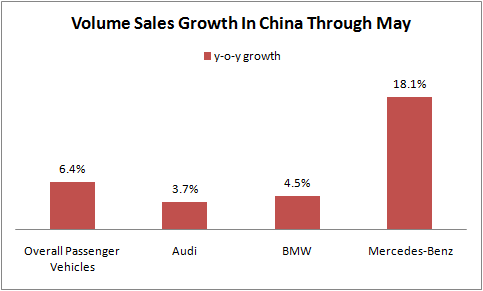 …So What Is Mercedes Doing Right In China?

Mercedes has expanded its local production capabilities in China, investing along with its domestic partner, BAIC Motor, in their joint venture Beijing Benz Automotive Co., Ltd. (BBAC). Last year, more than half of the Mercedes’ vehicles sold in China were locally manufactured (~150,000 units), and with production starting at the new compact car plant in April, net production capacity at BBAC will rise to about 250,000 passenger cars by the end of this year. Local production will help the German automaker evade the hefty import tariffs, consumption and value-added taxes, which make the brand less price competitive. Especially now, when domestic manufacturers in China have gained ground in the country’s automotive market, at the expense of foreign automakers, most of which import their vehicles.

In the first five months of this year, Chinese-branded passenger vehicles increased their market share to 42.1%, 3.9 percentage points more than 2014 levels. This was on the back of a 17.3% year-over-year rise in vehicle sales for local manufacturers, which included a whopping 101.5% rise in sales of their SUVs, which formed one-third the net volume sales for these manufacturers. [1] It is on the back of the surging demand for SUVs that domestic manufacturers have witnessed high rates of volume growth in the last few months.

The market for luxury SUVs in China is expected to double to 1.2 million units by 2020. Just for reference, less than 200,000 units of luxury SUVs were sold in China in 2010. Mercedes has cashed-in on this large demand for premium SUVs, and started selling the GLA model in the country in April, which is the second locally manufactured Mercedes SUV in China after the GLK. Furthermore, the successor of the GLK, the GLC, which made its world premiere in Germany this month, is also expected to make its way to the Chinese market soon.

Customers are opting for SUVs, which combine the looks of a car and the functionality and power of a utility vehicle, over sedans. SUVs and Crossovers have more capacity, a higher vantage point for drivers, and also carry most of the features that make a passenger car attractive, such as connected car features, comfortable seating, and attractive styling. SUV sales in China surged 47.7% year-over-year through May, while car sales were down 4.2%. Mercedes has done well in China recently on the back of strong sales for its SUVs.

Mercedes’ Compact And Super-Luxury Brands Are Doing Well Too

Apart from SUVs, Mercedes has also witnessed continued rising sales of its compact vehicles in China. In addition, what is raking-in more revenue for the German automaker is the incremental sales volume from the resurrected Mercedes-Maybach brand, which launched first in China this year, with the S400 and S600 models launching there in February. The models are priced at more than 2x their prices in the U.S., mainly because of the high import tariffs and transportation expenses. However, foreign automakers do tend to scale-up the prices of their products in China, where demand for luxury vehicles and world-renowned brands remains high. Mercedes responded to China’s anti-trust probe last year by cutting down the price of auto parts by 15-30%, but China’s antitrust regulator fined the luxury brand $57 million this year for unjustly and highly inflated vehicle and spare part prices.

Local production and scaling-back product prices in China will lower the average pricing for Mercedes, but incremental sales from super-luxury models such as the Mercedes-Maybach lineup could somewhat offset this decline going forward, especially as the brand is selling as many units per month in China as it did in a year globally at its peak, more than a decade ago. Mercedes-Maybach is selling around 500 units of the models, which start selling at ~$230,000, each month in the country.

The current reticence to buy in the luxury segment has impacted Audi and BMW in China recently, and even the Land Rover brand, which despite the large demand for luxury SUVs in the country, saw volume sales fall 20% year-over-year through May. This may be as customers are waiting to buy the locally-built Range Rover Evoque in China, which is why the delay in ramping up production there has hurt JLR. Nonetheless, Mercedes seems to be the clear winner in China, so far this year, despite the slowdown in the overall premium vehicle segment. China still remains relatively underpenetrated, as approximately only 8% of the the net vehicle sales are in the luxury segment, as opposed to 12-13% for the developed markets, with smaller presence of the luxury brands in the tier-3 and 4 cities. Mercedes’ strength in a market which is currently underperforming, suggests that the brand might be poised for stronger growth, compared to its competitors, once premium vehicle sales return to strong growth levels in China.