The approaching 2012 Olympic Games in London have captured the imagination of sports lovers across the world. Visa (NYSE:V) looks set to capitalize on the Olympic fever as the official payment services provider for the blockbuster event of the season. The company has launched a massive global marketing campaign, titled “Go World”, to promote the Games through various media such as television, digital advertising as well as social network platforms. [1] The Olympic Games will provide strong business opportunities for Visa as increased international tourism as well as merchandise sales will see a rise in transaction volumes processed by the company. Visa’s main competitors MasterCard (NYSE:MA), Discover Financial (NYSE:DFS) and American Express (NYSE:AXP) will also seek to benefit from this massive global event.

A Mobile is All You Need in London This Summer

Mobile phone and cashless payments, though still in a developmental stage, are gaining popularity rapidly. This summer, London is set to experience a revolution in this technology as more than 140,000 contact-less terminals are expected to be set up across the U.K.

The Samsung Galaxy S III, the official mobile phone of the summer games, will be equipped with Visa’s mobile payment application, Visa payWave, which will allow customers to make payments on-the-go by using the Near Field Communication (NFC) payment facility. [2] Tourists will be able to make use of contact-less payment services not only through retail outlets, but also for transportation services through cabs. Increased tourism and merchandise sales are expected through the Games period, as sports fanatics across the world look to support their countries.

We expect a 15% increase in transactions processed by Visa this year, in line with the strong performance reported by the company for the first quarter of the financial year. (See Visa’s Intl. Growth Helps Offset U.S. Regulatory Concerns)

The UEFA Euros, another major international sports event to take place this summer in Poland, will also contribute to increased tourism. We expect the euphoria surrounding the two events and the competing teams and athletes to boost cross-border transaction volumes.

International transactions, which account for 27% of our price estimate for Visa’s stock, have been increasing steadily over the past few years, and we expect the trend to continue with the advent of mobile payments. Developments in cash-less payment technology have coincided with the revolutionary sales of smartphones as NFC-equipped devices have been selling like hot cakes, with over 30 million units sold in 2011.

Visa recently unveiled its mobile wallet service, the V.me, which will compete with MasterCard’s offering, PayPass. (See Wallet Services Provide A Glimpse Into MasterCard’s Future) The convenience offered by this technology to customers especially while commuting will promote cross-border transactions as travelers are no longer limited by cash currency or traveler’s checks. This is reflected in our forecast for international transaction volumes processed by Visa.

We have revised our price estimate for Visa to $125, about 7% above the current market price. 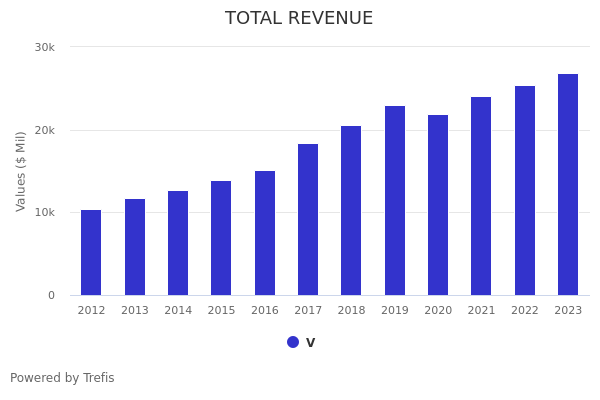 Why Visa Stock Moved: V Stock Has Gained 50% Since 2018 Primarily Due To Favorable Change In Revenues

Better Bet Than V Stock: Pay Less Than Visa To Get More From Industry Peer WEX

Visa Stock To Report Strong Earnings In Q1, Is It A Buy?

Forecast Of The Day: Total Visa Cards In Circulation

Wex’s Stock Down 28% In The Last Month, What Is The Likelihood Of Rise?

Forecast Of The Day: Visa’s Payments Volume Per Card

At $232, Is Visa Stock Still Attractive?

Earnings Beat On The Cards For Visa?

Is Visa Stock A Good Investment At $220?

There Are Better Alternatives To Visa Stock