Target (NYSE:TGT) is one of the largest retailers in the U.S. competing with the world’s largest retailer Wal-Mart (NYSE:WMT). Although there is an enormous gap between the revenues of the two retailers, though they are not all that different from each other. They operate similar format stores, have comparable product offerings and pricing. They even have some similar strategies and cater to a similar customer base in the U.S.

While both companies started 50 years back in 1962, Wal-Mart has expanded vigorously in the U.S. and international markets. Wal-Mart is now at the level of self-cannibalization in the U.S. and Target is far from it in our view. Moreover, Wal-Mart is well established in international markets and Target still has little to no presence so far. Due to its sheer size, Wal-Mart can be considered as a reference for the retailers in terms of market presence, and that is why we believe that Target has immense potential to expand.

See our complete analysis for Target

What Makes The Two Retailers Similar?

Most of the retailers’ product offerings fall under a similar categories such as grocery, hardlines and apparel. The both compete for customers seeking value, selection and convenience. They are also planning to penetrate the urban markets with their smaller format Wal-Mart Express and CityTarget stores. These trends suggest that the two retailers are on the same page in terms of market approach. However, Wal-Mart is way ahead of Target with almost six times its revenues.

Where Is Target And Where Can It Go?

Both the retailers started way back in 1962. Since then, Target expanded in the U.S. and currently has about 1,760 stores across 49 states in the U.S. On the other hand, Wal-Mart has around 4,000 stores in the U.S. and 6,000 globally in 27 different countries. In the U.S., Wal-Mart is almost at the level of saturation in terms of presence, but still has scope of expansion in the international markets. If we consider Wal-Mart as a reference for the potential market size, the immense potential for Target’s expansion is clearly visible.

Wal-Mart started its international expansion in 1991 with Mexico and entered Canada in 1995.

Target will open its first stores in Canada in 2013. Target is missing out on the growth opportunities in developing economies such as Brazil, Mexico and China. We believe that it will take Target a significant amount of time to establish itself in these regions, but the retail environment might not be equally lucrative then.

The big growth opportunities are right at Target’s door steps. The question that remains is, how will it respond.

Our price estimate for Target stands at $60, roughly inline with the market price. 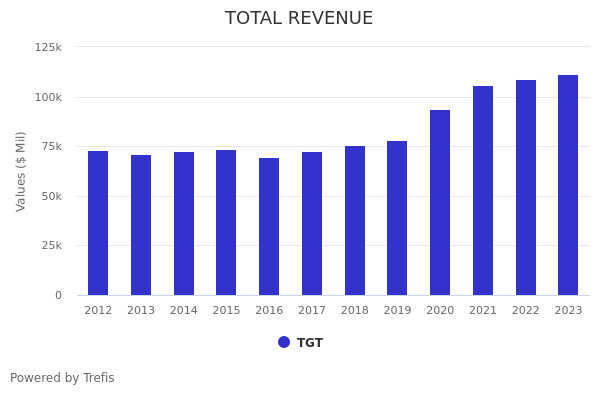 Target Stock Down 32% This Year, What’s Next?