AT&T (NYSE:T) is looking to reduce the subsidies it offers on smartphones according to a report in Reuters. Further the report says that the company, like Verizon (NYSE:VZ), will be offering shared data plans soon. [1] Both the carriers, along with Sprint (NYSE:S), have been facing the brunt of the huge subsidies that they provide subscribers at the time they purchase smartphones in return for signing a two-year contract. While initially the ploy worked as subsidies drove up the demand for smartphones as well as data services, the incremental value add has decreased over time as the wireless market became saturated and spectrum limited. Rolling back the subsidies gradually will help the carriers manage costs better while boosting revenues through shared data plans.

Saturation in the voice industry and the rise of data services has caused smartphones to increasingly figure into wireless carriers’ plans. The lure of the high data ARPU generating smartphone customer has also led the wireless industry to heavily subsidize these smartphones in order to drive their sales. For example, a basic iPhone 4S model costs around $650 for the carriers who then subsidize it heavily to sell for $199. Although this strategy holds promise over the longer term, carrier’s margins come under pressure in the near-term.

Now that the purpose of the subsidies have been met, data demand is exploding and spectrum resources are not enough to meet that demand, AT&T sees it prudent to roll back the subsidies gradually while not impacting smartphone demand too much. AT&T has also recently doubled the upgrade fees it charges subscribers for smartphone upgrades, another ploy to improve margins over the coming years. (see AT&T Doubles Smartphone Upgrade Fee; Looking for iPhone Subsidy Relief)

As for the shared data plans, AT&T will be looking to follow in Verizon’s footsteps and try to kill unlimited plans while promoting data share plans in their stead. AT&T has earlier voiced its concerns over the impact that the unlimited plans have on its network and has even tried to throttle the top 5% of its subscriber base to avoid congestion. Offering shared data plans in the place of unlimited plans will give the carrier more control over how much data it can afford to offer for a particular price without straining its network. The shared data bucket will also be beneficial for most users as they will be able to use multiple devices in the same data bucket, potentially decreasing the per device cost for the user. It will also allow a more efficient allocation of resources as against earlier when a few high data users used to clog the network to the detriment of the rest.

However, AT&T needs to get the balance right. While the shared plans would lessen customer churn as well as allow more number of mobile devices to connect to the network thereby earning AT&T more revenues than earlier, pricing the plans too aggressively will lower the average fee that the carrier can charge per subscriber while increasing data traffic and therefore the cost of maintaining the networks. Done right, AT&T could see higher ARPU levels in the coming years as subscribers add an increasing number of mobile devices that are not smartphones to its network and the carrier is able to monetize every last bit of data that the subscribers use. 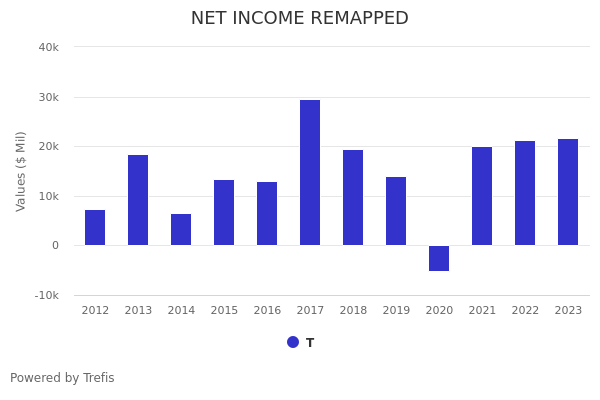