SanDisk (NASDAQ:SNDK) recently announced its Q1 earnings, reporting a 3% annual growth in revenue to just under $1.4 billion. SanDisk’s revenue and EPS figures were significantly higher than the consensus levels as shown in the table below. [1] 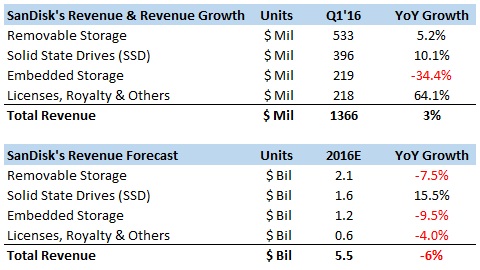 The revenue contributions of SanDisk’s two largest divisions through the quarter were roughly in line with our full year forecast for the company. An unexpectedly low contribution from embedded storage products led segment revenue to fall significantly for the flash-storage operator.

At the end of Q3 last year, SanDisk announced that hard drive manufacturer Western Digital (NASDAQ:WDC) will acquire the company for $19 billion. Consequently, the company did not hold its earnings call for Q3’15, Q4’15 and Q1’16. The deal likely to go through by the end of the June quarter.

Have more questions about SanDisk? See the links below:

1) The purpose of these analyses is to help readers focus on a few important things. We hope such lean communication sparks thinking, and encourages readers to comment and ask questions on the comment section, or email content@trefis.com
2) Figures mentioned are approximate values to help our readers remember the key concepts more intuitively. For precise figures, please refer to our complete analysis for SanDisk

How Has SanDisk’s SSD Division Performed Over The Last Few Years?

What Is SanDisk’s Fundamental Value Based On Expected 2016 Results?

What Will SanDisk’s Revenue And EBITDA Look Like In 5 Years?

How Has SanDisk’s Revenue Composition Changed Over The Last Five Years?

SanDisk Earnings Preview: Can Enterprise Storage Revive Results Or Is An Acquisition Inevitable?