Starbucks Corporation (NASDAQ:SBUX) has had a good quarter. It’s shares are up more than 10% helped by strong Q4 earnings. Contributing ever more to the bottom-line is its distribution line which the company segments as the channel development business. Unlike other restaurant chains, Starbucks has a well established distribution networks setup.

Sales of its products sold through the distribution channel totaled $1 billion and on the basis of results announced for the three quarters this year, we expect a 30% improvement. Furthermore, there is reason to believe that sales growth is likely to remain strong in the coming year as the company expands its offerings.

Starbucks forayed into the single-cup brewer market from September this year and has already made the product available in 6,400 retail outlets. Higher the sales of its brewers, higher will be the sales of its single cup packs which will again add revenues to the channel development segment. [1]

Similarly, it has also a deal with Green Mountain Coffee Roasters (NYSE:GMCR) as part of which Starbucks sells its K-Cups compatible with Keurig brewers. GMCR announced its results on November 27 which were well ahead of the market expectations. And strong Keurig sales is likely to result in higher Starbucks K-Cup sales as well.

Also, Starbucks is building a new production facility for Evolution Fresh, whose capacity will be four to five times that of the present facility. Once functional, the company can widen the distribution of the bottled juices sold under the brand. Evolution Fresh Inc is a juice company acquired by Starbucks in November 2011 in a $30 million all cash deal. Besides selling the bottled products, the company is also opening up juice bars under the brand’s name.

The restaurant chain introduced a new $7 a cup Geisha coffee which the company claims is made from rare Costa Rican coffee beans. The coffee has generated a lot of buzz due to its headline grabbing price. As expected, the beans will also be available as a packaged coffee at a price of $40 for half a pound. With its growing portfolio of packaged products, the channel development business is a tremendous opportunity for the company to exploit. [2]

Moreover, this business model also provides a downside protection in times of tough economic conditions. Restaurants usually have certain fixed costs such as labor and occupancy costs associated with them and in case the restaurants aren’t able to generate sufficient same-store sales growth, the margins get squeezed. The distribution model is more stable in that aspect and adds stability to the income statement.

We have a $58 price estimate for Starbucks, which is about 15% higher than the current market price. 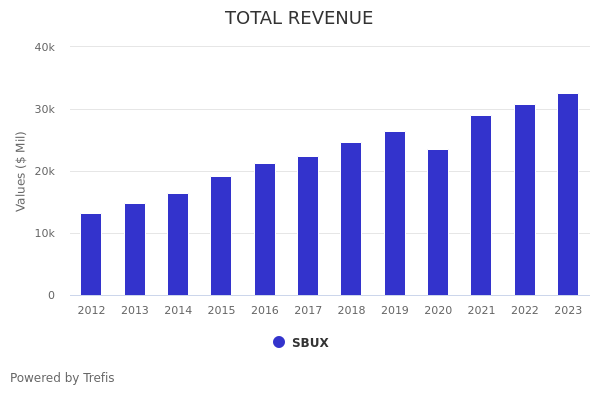