Telecom stocks have been badly impacted by the ongoing Coronavirus/oil price crisis, due to the slowdown in economic activity and shutdowns, which has led to a drop in consumer demand and spending. However, Sprint‘s (NYSE: S) stock is up by about 93% since early February (mainly due to its deal with T-Mobile), while its rival AT&T has seen its stock drop 20% over the same period. Sprint has fallen by about 6% since March 8th, as oil prices tumbled and U.S. coronavirus cases accelerated, while AT&T has declined by about 18%.

Our analysis Is Sprint Expensive Or Cheap After A 93.1% Move vs AT&T? compares the stock price performance and fundamentals of Sprint and AT&T over the last few years. 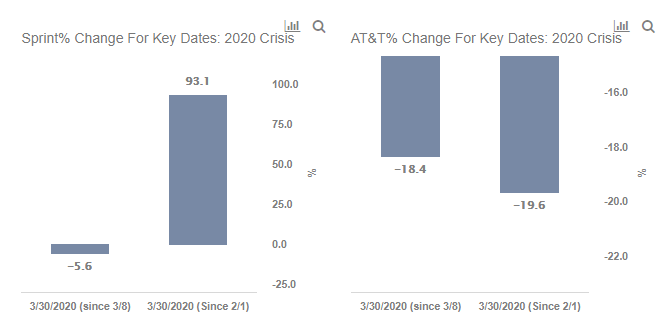 Reasons For Difference In Performance

While the outlook for both companies remains tough, as consumer demand and spending is expected to remain low due to the current pandemic, at least until the time there is confirmation of containment of the virus, AT&T’s higher revenue growth (due to the launch of its streaming service HBO Max in May 2020), along with Sprint’s higher debt burden (long-term debt to equity of 1.4x vs about 0.8x for AT&T), and much lower cash from operations, puts AT&T in a much better position to tide over the crisis.