The shares of Paychex (NASDAQ: PAYX) and  Automatic Data Processing (NASDAQ: ADP) have surpassed pre-pandemic levels assisted by a recovering economy and lowering unemployment figures. Currently, the market is pricing Paychex stock at a slightly higher trailing P/E multiple of 41 compared to 38 for ADP. Does that make Paychex stock an expensive pick? Comparing a slew of factors such as historical revenue growth, returns, and risk, Trefis believes that the market seems to be too optimistic on Paychex stock. Our earlier article, What Is Driving The Rally In Paychex Stock?, highlights the key reasons for the recent momentum in PAYX. While historical growth figures of Paychex have been better than ADP, both companies are likely to observe similar topline expansion in FY2022. Being the market leader, Trefis believes that ADP stock is a better pick over Paychex. Our dashboard Paychex vs Automatic Data Processing: Industry Peers; Which Stock Is A Better Bet? details the fuller picture, parts of which are summarized below.

Coming to Returns, both companies have been providing consistent returns to investors as dividends and share repurchases. However, ADP has a lower operating margin compared to Paychex, leading to lower operating cash flow and net margins.

As neither of the two companies have considerable net debt, technological disruption and competitive rivalry are key risks to their earnings. From the perspective of financial leverage, both companies are fairly comparable. 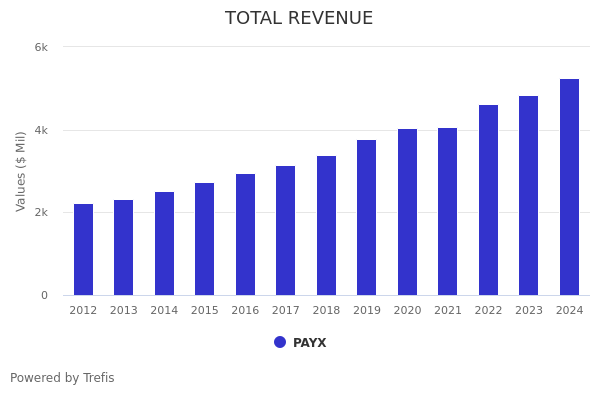 What To Expect From Paychex Q1 Results

Company Of The Day: Paychex

Why Are Investors Bullish On Paychex Stock?

Should You Book Profits In Paychex Stock Now Or Wait?

Company Of The Day: Paychex

Expecting Gains In Paychex Stock Ahead Of Earnings?