New York Times’ stock (NYSE: NYT), a diversified media company that includes newspapers, internet businesses, television, and radio stations, is scheduled to report its Q3 2022 results on Wednesday, November 2. We expect NYT stock to trade higher with revenues almost matching and earnings beating consensus expectations for its third-quarter results. For Q3, excluding The Athletic, NYT sees digital-only subscription revenue rising 10% to 14% y-o-y, and total subscription revenue up 5% to 7%. Ad revenues, meanwhile, are expected to decline in the low to mid-single digits, with digital ads down in the range of 4% to 8%. It should be noted that the company forecasts cost growth to slow down considerably in the second half of 2022 as the macro slowdown in its business is playing out largely as expected.

The media company continues to grow its subscriber base of digital-only subscribers, but this growth is largely a result of discounted offers. In response to escalating costs and a fear of losing subscribers, the company has also not been able to raise its subscription prices. It is for these reasons NYT acquired the sports news website The Athletic – its largest acquisition to date of $550 million. The Times also bought the popular word game Wordle, which was a much smaller deal, yet more evidence that the company is seeking out external growth sources. NYT stock may remain under pressure for the foreseeable future due to macroeconomic concerns, but we believe it can rise in the longer term based on its strong digital subscription growth.

Our forecast indicates that NY Times’ valuation is $34 per share, which is 17% higher than the current market price. Look at our interactive dashboard analysis on New York Times Earnings Preview: What To Expect in Fiscal Q3? for more details.

(1) Revenues expected to be almost in line with consensus estimates

Trefis estimates NY Times’ Q3 2022 revenues to be around $550 Mil, compared to the consensus estimate of $549 Mil. In Q2, the company’s revenue grew 11.5% y-o-y to $555.7 million, driven by a boost from its digital subscriptions. The company experienced a decline (-2%) in digital advertising revenue for the first time since 2020, joining other advertisers exposed to the slowdown. However, the company’s total ad revenue still rose 4% y-o-y in Q2. The company added about 180,000 net new digital-only subscribers (+ 70% y-o-y), and 230,000 subs vs. the end of the first quarter of 2022. Overall, the company ended the quarter with about 9.17 million paid subs across print and digital, of which 8.41 Mil were paid digital-only subscribers. The Athletic saw 50,000 stand-alone net adds, a 50% improvement y-o-y. Going forward, NYT has set a new target of at least 15 million total subscribers by the end of 2027.

NYT’s Q3 2022 earnings per share (EPS) is expected to come in at 15 cents per Trefis analysis, beating the consensus estimate. NYT earned 24 cents a share, down 33% y-o-y, excluding one-time items, in Q1. Higher costs due to its M&A strategy led to its EPS decline.

Going by our NYT’s Valuation, with an EPS estimate of around 96 cents and a P/E multiple of 35.3x in fiscal 2022, this translates into a price of almost $34, which is nearly 17% higher than the current market price. 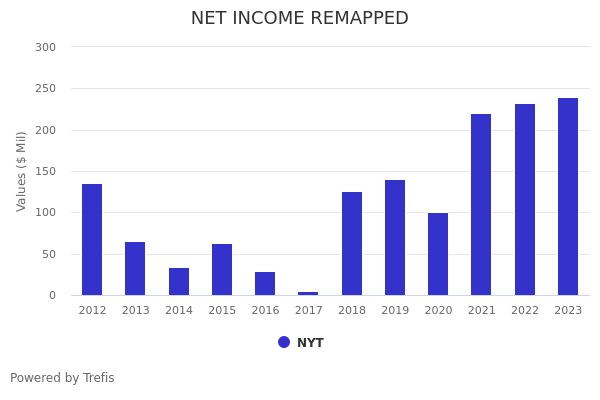