After months of speculation, the highly anticipated initial public offering of social network giant, Facebook, turned out to be a disaster for Nasdaq OMX Group (NASDAQ:NDAQ) as glitches in the software used by the exchange to establish a price caused confusion amongst investors and led to panicked selling. [1] The exchange had to resort to manual intervention to deal with overwhelming updates and cancellations as the stock did not perform as well as expected, falling below the initial price within two days.  Nasdaq’s main competitor is NYSE Euronext (NYSE:NYX).

While the Facebook stock did not live up to the hype that preceded that IPO, we do not anticipate any long term effects on trade volumes for the exchange, which has already established a strong reputation as the preferred listing destination for technology companies across the U.S.

Over 70% of technology companies from the U.S. are listed on Nasdaq, and it will look to capitalize on its position as the primary listing venue for Facebook as trading volumes pick up, once the initial dust following the storm has settled down. U.S. Cash Equity trading accounts for 12% of our price estimate for Nasdaq.

Reputation Tarnished But Not Destroyed

A crossed market situation was also observed on the first day of trading for Facebook, as a glitch in the software showed a very small difference between the highest bid price and lowest offer price which were $42.99 and $42.50 respectively. This led to a situation wherein buyers appeared to be willing to pay more than sellers were asking for. Although Nasdaq’s reputation was slightly tarnished by its handling of the most highly anticipated IPO in recent times, we expect its brand image to continue to attract new listings. An increase in listings is expected as the Job Act passed by the Obama government comes into effect, generating avenues for new businesses. U.S. Listings account for 37% of the Trefis price estimate.

We have a price estimate of $26.54 on Nasdaq OMX’s stock, about 15% above the current market price 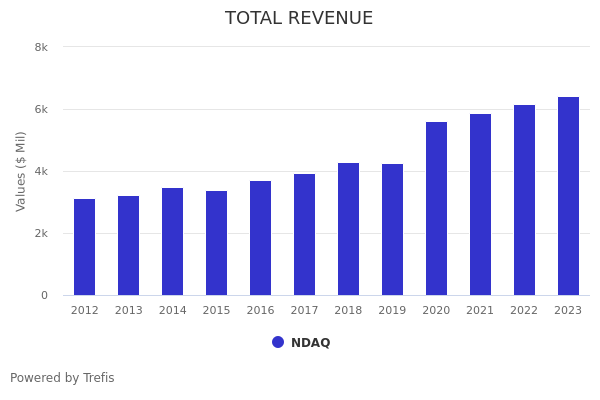