After going through the public consultation procedure, the Macau Gaming Bill is under discussion by the members of the legislative assembly. The draft bill proposes six concessionaires with a maximum term of ten years. The uncertainty surrounding the number of casino licenses led to a deep contraction in Las Vegas Sands stock (NYSE: LVS). Given the favorable directives in the draft bill, LVS stock has gained 15% since early January, and Trefis believes that the rally is likely to continue despite the ongoing weakness in Macau’s gaming industry. The company incurred just $1.6 billion of operational cash burn in the past two years, supported by effective cost control and capital preservation measures. Per Q3 2021 filings, Sands has $14.5 billion of long-term debt on its balance sheet with $7.6 billion, almost 50% of total debt, related to the construction, renovation, and other financing activities in Macau. Moreover, Sands’ Macau-related debt has a maturity profile spread over the coming decade. We highlight the trends in revenues, earnings, and stock price in interactive dashboard analysis, Las Vegas Sands Valuation.

Below you’ll find our previous coverage of  Las Vegas Sands stock where you can track our view over time.

Since March, the shares of Las Vegas Sands (NYSE: LVS) and Penn National Gaming (Nasdaq: PENN) have observed a deep contraction after observing a strong rally in the first quarter. While the anticipation of increased regulatory oversight has led to pessimism in Las Vegas Sands stock, the shares of Penn National Gaming observed a broad-based correction along with other sports betting stocks. Interestingly, Sands and Penn have comparable assets and long-term debt on the balance sheet, despite a sizable difference in revenues. Considering Las Vegas Sands’ higher profitability, significantly lower market capitalization, and effective cost control measures limiting cash burn, Trefis believes that it is a good pick to realize capital gains. On the contrary, Penn stock reached historical highs in March as investors speculated on market share gains of its sports betting application, Barstool. We compare a slew of factors such as historical revenue growth, returns, and valuation multiple in an interactive dashboard analysis, Las Vegas Sands vs. Penn National Gaming: Industry Peers; Which Stock Is A Better Bet? (related: Las Vegas Sands Stock Is A Steal) 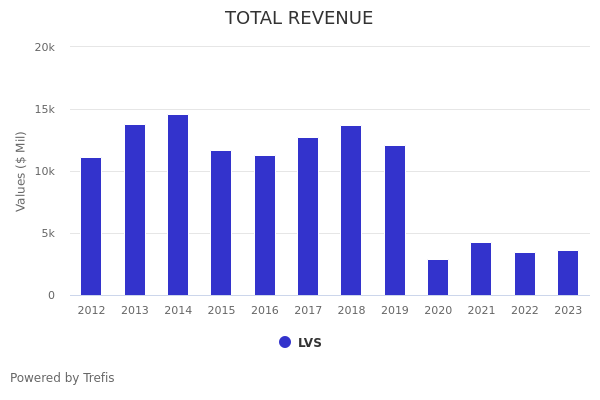 Las Vegas Sands During 2008 Recession vs. Now: LVS Stock Has 105% Upside If It Recovers To Pre-Covid Levels

Las Vegas Sands vs. Large Cap Stocks: Which Is A Better Investment?

Las Vegas Sands vs. Sports Stocks: Which Is A Better Investment?

How Low Can Las Vegas Sands Stock Go In A Market Crash?

Should You Hold Las Vegas Sands Stock For Strong Gains?

Should The Rally Continue In Boyd Gaming Stock?