The Vermont based K-Cups maker, Keurig Green Mountain (NASDAQ:GMCR), had a busy time last year with numerous partnership and distribution deals with coffee companies and some retail chains. The company reported its Q1 2015 report on February 4, as it delivered non-GAAP EPS of $0.88 in Q1, which was in-line with the guidance. However, the company’s revenue figures came in below expectations, due to a weak holiday period for brewers and other accessories in terms of sales. The weak brewer sales in the holiday season also included the negative impact of a recall on certain MINI plus brewers, and greater than expected retailer portion pack inventory reductions. The company mentioned that it was expecting a decline in the brewer sales year-over-year (y-o-y) due to the low promotional price points last year. However, the decline was more than the expectations due to the voluntary product recall. [1] In the first quarter, the brewer and accessory sales declined 18% y-o-y to $307 million, and the brewer volume was down 12% y-o-y to 4.5 million brewers.

Keurig released its new brewer: Keurig 2.0 in the fourth quarter (September ended quarter) of fiscal 2014, and was anticipating a great response from its customers in the initial phases. According to the data reported by the company, Keurig 1.0 and Keurig 2.0 U.S. reservoir shipments grew nearly 6% y-o-y, which was lower than the company’s expectations. Keurig 2.0’s launch was fairly unimpressive because of two major reasons — firstly, the delay in putting the new packs on the retail shelves, and secondly, consumer perception about the Keurig 2.0. Most of the customers were unclear whether the new version of Keurig brewer would brew all their favorite brands. This confusion led to lower brewer sales in the key holiday period. Keurig witnessed a 2% revenue growth in the U.S., whereas its Canadian business declined 12%, due to weaker brewer sales coming as a result of slower adoption of the Keurig 2.0.

We have a $102 price estimate for Keurig Green Mountain, which is 10% below the current market price.

While Trefis’ estimates for GMCR stock price is 10% below the current market price, we estimate the net revenues to be in-line with the general consensus, as well as expecting higher than expected  expenses, due to launch and marketing of Keurig Cold this year. However, taking the current market and industry trends, as well as probable future scenarios in mind, there is one case that can impact the company’s stock price significantly.

As discussed above, the brewer volume declined to 4.5 million brewers in Q1 2015 from 4.9 million brewers in Q1 2014. As a result, the sales of the brewers declined 18% y-o-y. However, the total brewers sold annually has increased drastically from 2.34 million in 2009 to 10.7 million in 2014. As seen before, Keurig’s share price is directly correlated to its customer base. GMCR stock rose more than 45% in the first 10 months, as the brewer sales figures outperformed previous year’s figures. Similarly, as the brewer volume growth declined, the stock price tumbled roughly 15% in the last 2 calendar months.

Trefis estimates the brewer volumes to increase at an average rate of 8% in the next 6 years to reach the figure of 17.8 million annual brewer sales in 2021. As mentioned before, confusion among the consumers related to Keurig 2.0 was one of the reasons for poor performance of the new brewer technology. However, the company believes this might not be the case in 2015 and the brewer volume might increase in the remaining quarters.

Now, let us assume that the decline in brewer volume growth might be due to stagnation in the market. Brewers are those products whose usage cycle can be for around 2-3 years, i.e. until the release of the next generation of brewer technology. Keurig Vue brewing system was introduced to the market in 2012, and then the Keurig 2.0 was introduced in 2014. However, the market is expecting this brewer cycle to continue for a longer time,  probably 3 years. In that case, stagnation in the market might lead to slower growth in the brewer volumes; say just an average of 2% for the next 6 years, so that the volume reaches just roughly 12 million units annually sold in 2021.

With such slower growth, the company might have to keep the price increase of the brewers under check as well. Currently, Trefis estimates the average price per brewer to increase to $98 by the end of 2021. In the above mentioned scenario, let us assume that the company controls its price hikes and the average price per brewer rises to just $86 by the end of 2021.

In this scenario, there could be a 6% downside to our price estimate for the company. This can be a significant driver in the coming years, considering that brewer accounts for 16% of the total revenue of the company. 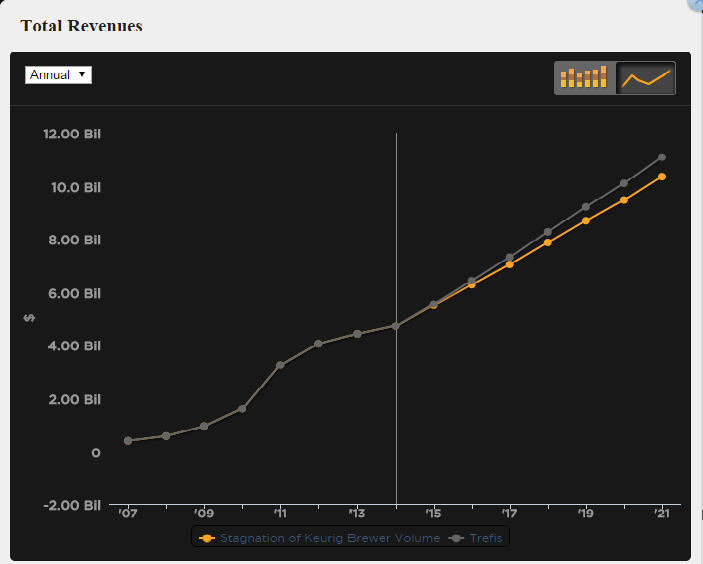