We have raised our price estimate for Keurig Green Mountain (NASDAQ:GMCR) due to a number of factors affecting our forecast including the number of K-Cups sold being increased, potentially lucrative partnerships with top coffee and retail brands, the company entering the tea segment, the number of brewers increasing due to the Subway deal, the average price of K-Cups increasing because of the Nestle deal, the rising price for coffee which has increased the price for a K-Cup, and strong earnings from the company the past two quarters.  These factors have increased our optimism in the company’s ability to deliver strong results in the future and have led to our increasing our price target for the company.

The Vermont-based coffee brewer specialist Keurig Green Mountain (NASDAQ:GMCR) recently reported its fiscal 2014 annual report on November 19. The company delivered strong numbers in its fourth quarter, with 14% year-over-year (y-o-y) growth in net revenues. On one hand, net portion pack sales grew 22% y-o-y to $950 million in the fourth quarter, primarily driven by a 28% increase in the portion pack volumes, but on the other hand, brewer sales declined 5% y-o-y in the fourth quarter, due to a decline in brewer volumes by 8% and brewer pricing by 11%. [1]

The company released its new brewer system Keurig 2.0 in the U.S. in the last week of August. Keurig Green Mountain’s distribution deals and partnership deals with licensed brands have picked up pace in the last 18 months; the company now has nearly 70 licensed coffee and retail brands. The company justifies these decisions as a strategy to increase its market share in the exponentially increasing single-serve coffee market.

We have a $108 price estimate for Keurig Green Mountain, which is roughly 20% below the current market price.

Over the last 4 years, coffee chains have lost ground to the portion packs coffee trend. Customers have gradually shifted to the single serve method of coffee brewing, which provides them with the convenience of brewing their coffee at home in no time. Nearly 29% of the U.S. coffee drinkers now opt for a single-cup brewer. [2] 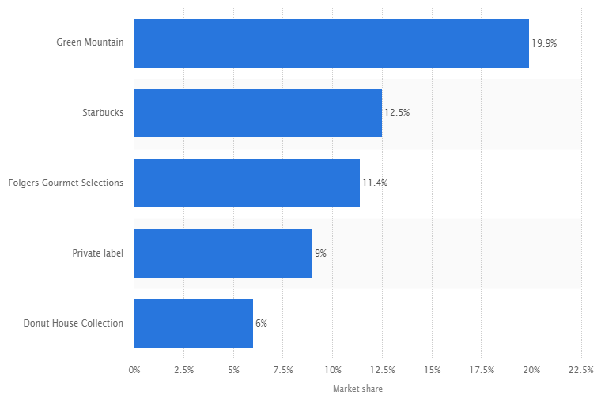 Keurig Looks To Expand Its Customer Base

Keurig Green Mountain has always been famous for its innovative brewer technologies and easy to use K-Cups. However, the company’s patents expired in 2012, after which brands such as Folgers, Starbucks, and Maxwell House introduced their own Keurig-compatible versions. As a result, the brewer giant started losing market share to its competitors. To counter the impact, Keurig immediately planned to join hands with high profile coffee brands, such as Caribou Coffee, Folgers, Dunkin’ Donuts, and Starbucks, among others, to boost its K-Cup sales.

Although the impact of patent expiration was not too significant, the company focused on increasing its market share by joining hands with some of the top coffee and retail brands in the industry. In May 2014, Coca-Cola (NYSE:KO) raised its stake in Keurig Green Mountain to 16%.  (( SEC filing, May 8th, 2014)) As a result, shares of GMCR jumped 7.5% to $119.07. The two companies entered into  a joint venture, in which they are developing the cold beverage brewer platform, the Keurig Cold. Keurig Cold will be designed to dispense single servings ranging from carbonated drinks to non-carbonated beverages like juice drinks and iced teas, providing its users the convenience of at-home carbonation technology and the ease of carrying compact flavor sachets, rather than the bulky PET bottles from retail stores. (See Coca-Cola-Keurig Green Mountain Deal: A Win-Win Situation for both)

In June, Keurig announced its partnership with the restaurant chain Subway to bring Keurig’s single-serve brewers to almost all of the Subway chains in the U.S. and Canada. [4] This deal might prove to be a blockbuster move for Keurig Green Mountain, as Subway not only provides an additional platform for the company’s revenue growth, but also a huge platform to reach out to more customers, giving a boost to brewer and portion packs’ volume growth, which might subsequently translate into improved revenue growth.

This was followed by a multi-year deal with the U.S. division of Nestlé (SIX: NESN), Nestlé USA on July 1, to bring Nestlé’s branded coffee with creamer to its customers. Nestlé became the first brand to offer a 2 in 1 K-Cup pack for hot coffee, combining high quality roast and ground coffee with branded creamer, available in two flavors : Original and French vanilla.  According to the company, the partnership brings new innovation and flavor to the Keurig product line, while offering its customers an easy access to their daily coffee without compromising on the taste. In August, the company announced yet another multi-year licensing, manufacturing and distribution deal with one of the largest consumer packaged food and beverage companies, Kraft Foods Group (NASDAQ:KRFT), adding to its already long list of licensed brands. Apart from these deals, Keurig entered into distribution agreements with some well known grocery chains, such as SUPERVALU (NYSE: SVU) and Meijer, as well as coffee chains such as Café Bustelo and Harris Teeter.

The number of licensed coffee brands offered by Keurig Green Mountain increased from 30 to 70 over the last 18 months, providing almost 500 different varieties of coffee, tea and other beverage options. As a result, coffee drinkers who have Keurig brewers installed at home can now enjoy their favorite branded coffee at home, without going to specific coffee shops.

In August, Keurig Green Mountain released its next generation brewer system in the U.S.: Keurig 2.0.  The company claims that the new brewer brings more choice to its customers, as it can brew a single cup using a K-Cup pack or four cups using the new K-carafe pack. [5] The product is already in huge demand among coffee lovers who want to upgrade to a more convenient option. According to the data provided by Keurig, nearly 60% of the non-Keurig owners and 72% of the current Keurig owners want a technology that can brew more than one single cup in one go. Keurig can now serve a wider range of customer base, with different coffee tastes, as it now serves more than 50 top coffee brands. This will not only increase the brewer’s sales, but also ensure the company’s dominance in the single-serve market as well.

In September, Keurig and Coca-Cola expanded their partnership to offer some beverages from the latter’s still brands (non-carbonated) portfolio in the Keurig hot brewing system, in the U.S. and Canada. [6] Honest Tea is the first brand of the Coca-Cola Company that would be available in K-Cup packs. The new Honest Tea K-Cup packs feature two products initially: Unsweetened Just Green iced teas and Just Black iced teas. These will join Keurig’s Brew Over Ice collection.

Keurig Green Mountain is planning to tap into a market that has a huge growth potential, especially in the U.S. This might boost its K-Cup sales, as it targets those Coca-Cola customers who are already fond of the company’s Honest Tea product. (See: Keurig Green Mountain To Expand Its Ready-To-Drink Beverage Segment With The Launch Of Honest Tea) RTD Tea is a growing beverage segment, with a double-digit sales growth in the U.S.  Moreover, the segment is expected to grow at a CAGR of 6% in the U.S. until 2018, providing ample growth opportunities for tea companies.

Due to the consistently strong financial performance by the company, coupled with the potential positive impact of new brewer, Keurig 2.0, and Keurig Cold and a long list of top coffee brands under its arsenal, Trefis estimates the company’s net revenue to cross $10 billion and portion pack volume to double by the end of 2018. Moreover, the increasing coffee prices might drive the company’s margins for the next couple of years. As a result, our price estimate for Keurig Green Mountain has increased to $108.