On September 3, the Vermont based K-Cups maker, Keurig Green Mountain (NASDAQ:GMCR) and Coca-Cola Company (NYSE:KO) announced they are expanding their partnership to offer some beverages from the latter’s still brands (non-carbonated) portfolio in the Keurig hot brewing system, in the U.S. and Canada. [1] In February, Coca-Cola had initially bought a 10% stake in the company for $1.25 billion, after the release of Keurig’s first fiscal quarter report. In early May, Coca-Cola announced that the company is raising its stake in Keurig Green Mountain to 16%. [2] Evidently, the deal strengthened the relationship the two companies had outlined back in February, and came as a bonus to GMCR’s shareholders as Coca-Cola’s purchase drove up its share price; the shares of GMCR skyrocketed by 53% within the next two weeks, touching its peak stock price of $123.74. (see Coca-Cola-Keurig Green Mountain Deal: A Win-Win Situation For Both)

Honest Tea is the first brand of the Coca-Cola Company that would be available in K-Cup packs. The new Honest Tea K-Cup packs feature two products initially, Unsweetened Just Green iced teas and Just Black iced teas, and they will join Keurig’s Brew Over Ice collection. (Ref:1) Keurig’s Brew Over Ice collection is a special collection to brew hot beverages over ice with Keurig’s hot beverage system, making it easy and convenient for customers to get iced beverages in different flavours at home.

Over the last two years, Keurig Green Mountain has managed to attract customers with its innovative new brewer technologies and a wide range of beverage brands. Over the last six months, Keurig has entered into several distribution deals with some of the top retail chains and coffee brands, with the motive of accelerating its top line growth. We have discussed the possible impacts of these deals on the company’s revenue growth in our prior articles – Keurig-Nestlé Deal: Creamer Added K-Cups To Boost Net Sales and Keurig Green Mountain’s Partnership With Subway To Boost Volumes Of Brewers and K-Cups.

Now the company is keen on exploring beverage segments such as RTD tea & coffee, which are comparatively a smaller share of the company’s portfolio, but are the fastest growing segments in their respective categories.

Tea, which contains antioxidants that boost metabolism, is considered as one of the healthier alternatives to carbonated drinks in the U.S. It is the second most widely consumed beverage worldwide, after water. RTD tea is one of the fastest growing segments in the beverage industry. In the U.S., the RTD segment registered a high double-digit percent growth to reach $5.1 billion in sales. RTD tea is expected to generate sales of $5.3 billion in 2014 and grow at a CAGR of over 6% till 2018, providing ample growth opportunities to tea making companies. [3] The per capita tea consumption in the U.S. was 8.9 gallons in 2012. [4] The sales of specialty RTD tea & coffee at retail stores  in the U.S. rose 25% in the last two years. 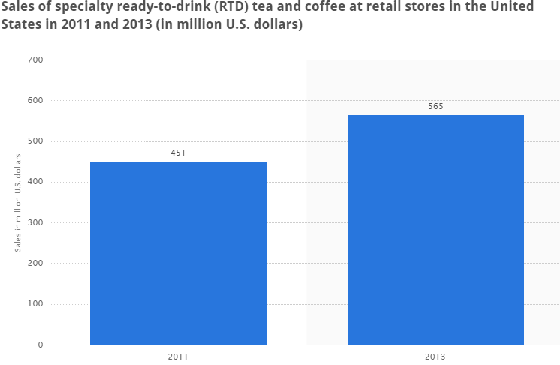 Considering the above mentioned statistics, it is clearly evident that RTD sector is a widely popular and fastest growing sector in the beverage industry. Keurig Green Mountain is planning to tap into a market that has a huge growth potential, especially in the U.S. This might boost its K-Cup sales, as it targets those Coca-Cola customers who are already fond of the company’s Honest Tea product.

In the latest Q2 report, Coca-Cola reported 3% year-over-year growth in worldwide volumes, as its ready-to-drink (RTD) tea volumes rose 4% globally, and 6% in North America. One of the factors for excellent growth in North America was the double-digit percent increases in Honest Tea volumes. Honest Tea marked its one billionth beverage sale in June, with 888 million sales since Coca-Cola became a partner in 2008. [5] Although representing a small portion of the U.S., RTD tea segment, including Honest Tea, could continue to grow in the following quarters due to the rising demand for tea drinks.

As consumers look to shift away from sugar and calorie-fueled beverages, RTD tea has become one of the fastest growing segments of the U.S. liquid refreshment beverage (LRB) market. Due to the growing demand for iced tea as a healthier refreshment drink, coupled with low current penetration levels, the U.S. RTD tea segment is expected to generate sales of $5.3 billion in 2014, up from $5.1 billion last year, and grow at a CAGR of over 6% till 2018. [6]

Keurig might introduce more non-carbonated products, especially tea brands such as Gold Peak and Fuze Tea, in its portfolio to further penetrate this market. Gold Peak, like the Honest Tea, has had a double-digit growth in North America in the last quarter and is widely popular in the U.S.