E*Trade Financial (NASDAQ:ETFC) has had a solid year so far. With three quarters reported, the brokerage’s revenue growth year to date has been nearly 24%, and we expect this trend to continue when the company reports its fourth quarter earnings on January 24. We believe this growth will be primarily driven by revenues from interest earning assets. This revenue stream has continued its strong performance throughout the year, in large part due to the rate hikes over recent months and the expectation of further interest rate hikes in the year ahead. In addition, despite cuts to trading commissions, we expect the acquisitions of OptionsHouse, TCA, and 1 million brokerage accounts from Capital One to further boost trading volumes and new brokerage accounts and provide for a decent near-term opportunity. 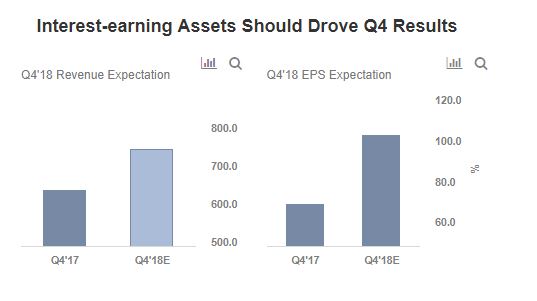 Our price estimate for E-Trade’s stock stands at $62, which is around 30% above the market price. We have also created an interactive dashboard which outlines what to expect from ETFC’s full-year results. You can modify the key value drivers to see how they impact the company’s revenues and bottom line. Below we discuss some of the key factors that are likely to impact the brokerage’s earnings.

Interest earning assets, which generate about 65% of E-Trade’s revenues, have been the key driver of growth for the company so far, and we expect this trend to continue into Q4. The revenues from this segment grew by nearly 28% in the first nine months of 2018, driven by the Fed’s interest rate hikes. Additionally, the company has the highest yield on assets (around 3.1%) relative to its primary competitors, which has contributed to impressive growth in revenue. Further, robust growth continued into the first two months of Q4, with 18% and 17% year-over-year growth in assets for November and October, respectively. This growth momentum likely continued in December as well and should significantly propel revenues from this segment.

Trading volumes sustained its steady growth in 2018 thus far, as a result of the OptionsHouse acquisition. Further, the brokerage saw nearly 11% and 40% year-over-year growth in trading volumes for November and October, respectively. A part of this is attributed to the recent acquisition of TCA. Despite E-Trade’s decision to slash its commission per trade, we expect a notable jump in trading volumes and brokerage accounts in the near term owing to the TCA acquisition. As trading commissions generate a comparatively small percentage of the company’s overall revenue, we do not expect the price cut to have a significant impact on revenue and EPS growth in the near term.

Why Isn’t Charles Schwab’s Stock Benefiting From The Spike In Trading Volumes?

E*TRADE: Will Lower Trading Commissions Cause Revenues To Be Short Of Consensus Estimates For FY 2019

How Has E*Trade Gained From TCA’s Advisor Management Services’ Business?

What To Watch For In E-Trade’s Q3 Earnings