Charles Schwab (NYSE: SCHW) stock has fallen over 33% between 20th February and 18th March – largely tracking similar declines across industries from negative market sentiments over the coronavirus pandemic as well as the oil price war. The decline in Schwab’s stock price was accompanied by a sharp reduction in total client assets and an increase in client cash as a % of client assets in February compared to January. We believe this trend will continue over March, too – hurting the brokerage giant’s top line for the quarter. Although average daily trades have increased considerably over the same period due to higher trading activity, the elimination of trading commissions late last year means that Schwab’s revenues aren’t going to benefit directly from this.

Overall, a sharp drop in total client assets, coupled with the overall negative market sentiment, were the main reasons behind the sell-off in Schwab’s stock.  In this analysis, we have analyzed Charles Schwab on several metrics and compared its performance with its peers TD Ameritrade and E*TRADE. It is to be noted that the Charles Schwab-TD Ameritrade merger would take 18-36 months, and till then, they would be considered as separate companies.

Although Charles Schwab stock has dropped almost 37% between 20th February and 16th March, the downward trend is not limited to Charles Schwab alone – its peers have witnessed a similar trend 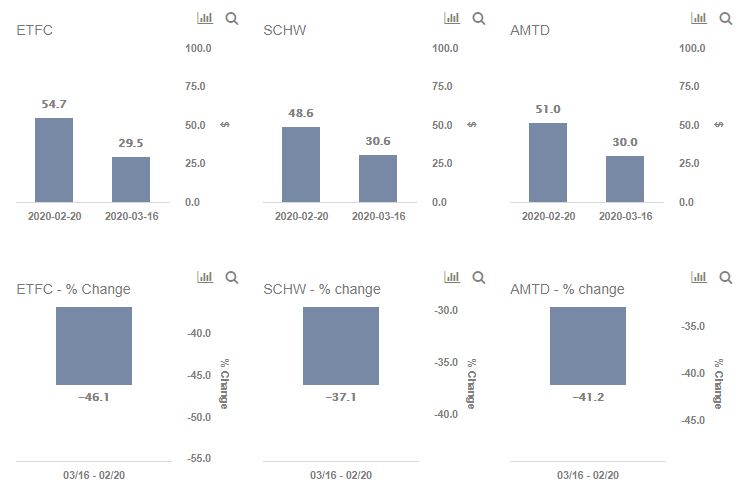 Charles Schwab client assets have reduced by 5% in February, as compared to the January figure

While client assets dropped in February, client cash and deposits increased for each of the three companies.

You can read about the impact of the coronavirus outbreak on the stock of major U.S. companies, including Netflix, Disney, and P&G, among others on the Trefis coronavirus topic page.

Charles Schwab vs. Large Cap Stocks: Which Is A Better Investment?

Charles Schwab vs. Crypto Stocks: Which Is A Better Investment?

How Low Can Charles Schwab Stock Go In A Market Crash?

What To Expect From Charles Schwab Stock In Q1?

Charles Schwab Stock Is Trading Below Its Fair Value

At $66, Charles Schwab Stock Is A Bit Expensive

Charles Schwab Has Rallied 30%, Now What?