E*Trade Financial (NASDAQ: ETFC) is scheduled to announce its third quarter results on Thursday, October 18. Consensus market estimates call for the company to report revenue of $910 million and adjusted EPS of 82 cents. Continued momentum from the recent Fed hikes should drive healthy growth in revenues from interest-earning assets. Further, improvement in U.S. macro conditions should drive trading volumes and consequently, trading commissions. Additionally, the acquisition of TCA should further boost the brokerage’s customers and asset growth in the near future. Accordingly, we expect the brokerage’s 2018 revenue and EPS to grow by 20% and over 67%, respectively, and Q3 results will likely be along the same lines. 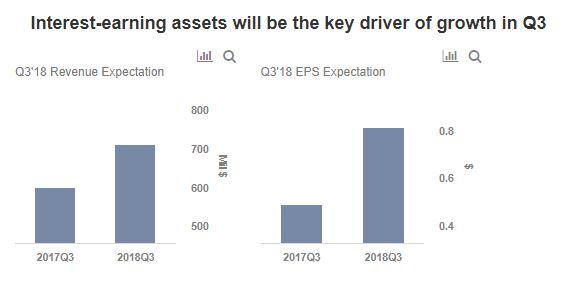 Our price estimate for E-Trade’s stock stands at $62, which is higher than the market price. We have also created an interactive dashboard on Can Interest-Earning Assets Drive Growth For E-Trade In Q3, which shows the forecast trends; you can modify the key value drivers to see how they impact the company’s revenues and bottom line.

We expect that interest-earning assets will continue to be the key driver of growth in Q3. The Fed’s interest rate hikes in 2017 led E-Trade’s interest earning assets to grow by 23% in the year. Further, the robust growth continued in 2018 thus far, with over 31% and 26% year-over-year growth in assets for August and July, respectively. As a result, revenues from this segment, which contribute around 60% of the company’s overall revenues, are likely to increase significantly.

Trading commissions account for nearly 20% of E-Trade’s overall revenues. Trading volumes maintained its strong growth in 2018 thus far, owing to the acquisition of OptionsHouse. Further, the brokerage saw nearly 30% and 20% year-over-year growth in trading volumes for August and July, respectively. A part of this is attributed to the most recent acquisition of TCA. The company’s decision to slash its commission per trade in 2017 could weigh slightly on its results. That said, we expect a significant jump in trading volumes and brokerage accounts in the near term owing to the TCA acquisition. Since trading commissions generate a relatively small percentage of the company’s overall revenue, we do not expect the price cut to have a significant impact on revenue and EPS growth in the near term.

Why Isn’t Charles Schwab’s Stock Benefiting From The Spike In Trading Volumes?

E*TRADE: Will Lower Trading Commissions Cause Revenues To Be Short Of Consensus Estimates For FY 2019

How Has E*Trade Gained From TCA’s Advisor Management Services’ Business?

What To Expect From E-Trade In Q4