Disney stock (NYSE:DIS) has declined by almost 20% over the last month and also remains down by almost 45% from its 2021 highs. While Disney has seen some negative news flow in recent weeks relating to its spat with Florida lawmakers over a controversial law, much of the stock’s correction appears to be driven by apparent concerns about the Disney+ streaming business, following Netflix’s tough Q1 earnings. The streaming bellwether, Netflix, reported that it lost subscribers for the first time in a decade while indicating that it could lose more in the current quarter amid mounting competition and also as people rely less on streaming as the economy opens up post-Covid.

Investors are likely concerned about what this means for Disney, given that Disney’s streaming operations are still burning cash, as it continues to ramp up its streaming investments. For example, for 2022, Disney indicated that it would raise content spending by $8 billion, reaching a total of $33 billion, to support its direct-to-consumers services such as Disney+, Hulu, and ESPN+. This could be proving negative for the stock, as the rising spending comes at a time when the streaming market is cooling off, with investors also increasingly prioritizing cash flows and profitability as interest rates rise.  We should have more color on how Disney’s streaming businesses are trending when the company publishes March quarter results on May 11.  Now there haven’t been any signs of a major slowdown in Disney+ subscriber growth just yet, with the company growing its user base by 37% over 2021 to about 130 million as of the end of 2021.

Despite the recent concerns in the streaming industry, we think Disney stock looks like a buy for a couple of reasons. Investors probably shouldn’t worry too much about the rising investments Disney is making into its streaming operations. Unlike Netflix, which monetizes its content investment solely via monthly subscription fees, Disney has a much larger value chain, given its theatrical business, theme parks, merchandise, and licensing operations. Disney’s content investments are also likely to be much more durable, given its iconic franchises, unlike Netflix which focuses a lot on one-off shows.

Disney’s earnings are likely to rebound strongly this year, driven primarily by the recovery in its lucrative theme park business. Over Q1 FY’22, Disney’s Parks, Experiences, and Products segment’s results blew past expectations, with revenue standing at $7.2 billion, more than double the year-ago figure, with operating profits coming in at about $2.5 billion. This is only likely to get better going forward, with Covid-19 cases in the U.S. on the decline. Per capita spending in Disney’s parks has also soared by 40% in Q1, versus the same period in Q1 2019, indicating that these assets could emerge stronger than pre-pandemic levels, generating sizable cashflows for Disney and potentially masking some of the impacts of rising content investments.

Disney’s valuation multiples are also quite compelling. The stock trades at about 27x consensus 2022 earnings and a little over 20x 2023 earnings. We value Disney stock at about $190 per share, which is roughly 70% ahead of the current market price. See our analysis of Disney valuation for more information on what’s driving our price estimate for Disney and how its valuation compares with peers. See our analysis on Disney revenue for a closer look at the company’s key revenue streams and how they have been trending. 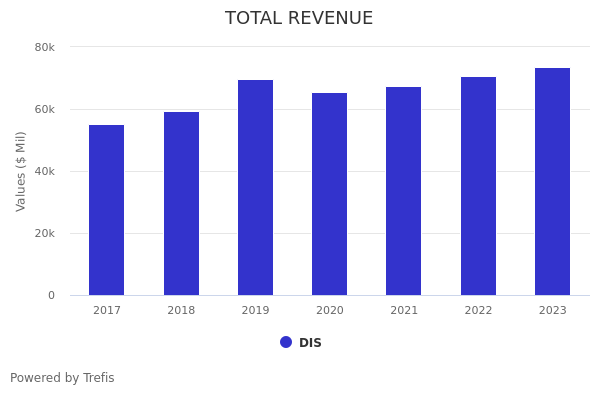 Walt Disney vs. Large Cap Stocks: Which Is A Better Investment?