Walt Disney stock (NYSE: DIS) was down more than 4% on 21st September 2021, while the stock is down more than 2% in the last one week. Disney stock, which trades at $176 per share currently, saw a decline over the last few days after the company’s CEO (Bob Chapek) gave a disappointing forecast for growth in its Disney+ division. After surpassing expectations by netting 12.4 million new customers in Q3 2021 (ending June 2021), as per Mr. Chapek, the company has hit some headwinds in the fourth quarter. Paid subscribers of Disney+ are expected to rise only in low single-digit millions. Adding to investors’ disappointment, the CEO also said that Disney has no plans to immediately reinstate dividend or share buy backs, citing lack of more normalized operating environment as well as cash flow and debt constraints.  But will Disney’s stock continue its downward trajectory over the coming weeks, or is a recovery in the stock more likely?

According to the Trefis Machine Learning Engine, which identifies trends in a company’s stock price data for the last ten years, returns for DIS stock are likely to be more than 2% in the next one-month (21 trading days) period after experiencing a 2% drop over the previous one-week (five trading days) period. Also, there is a 62% chance of the stock giving positive returns over the next one month. But how would these numbers change if you are interested in holding DIS stock for a shorter or a longer time period? You can test the answer and many other combinations on the Trefis Machine Learning Engine to test Disney stock price forecast after a rise or fall. You can test the chance of recovery over different time intervals of a quarter, month, or even just one day! For additional details about Disney historical returns and return comparison to peers, see Disney (DIS) Stock Return. 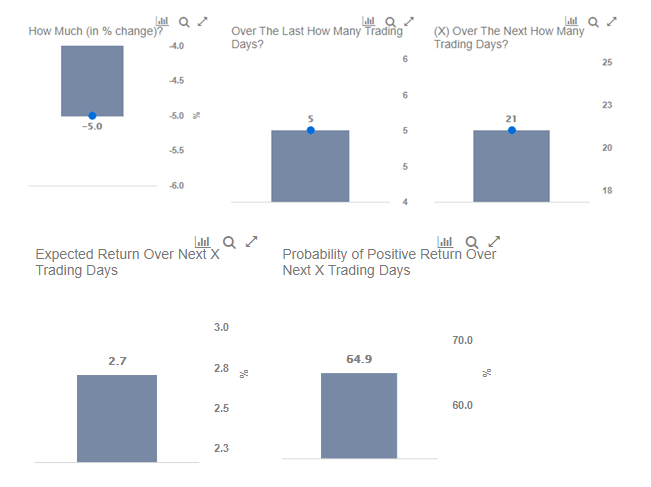 Question 1: Is the price forecast for Walt Disney stock higher after a drop?

Is the price forecast for Walt Disney stock higher over the subsequent month after Case 1 or Case 2?

Try the Trefis machine learning engine above to see for yourself how the forecast for Walt Disney stock is likely to changes after any specific gain or loss over a period.

If you buy and hold Walt Disney stock, the expectation is over time the near-term fluctuations will cancel out, and the long-term positive trend will favor you – at least if the company is otherwise strong.

Question 3: What about the stock price forecast after a rise if you wait for a while?

The expected return after a rise is understandably lower than after a drop as detailed in the previous question. Interestingly, though, if a stock has gained over the last few days, you would do better to avoid short-term bets for most stocks.

How Low Can Walt Disney Stock Go In A Market Crash?