We think that Stryker stock (NYSE: SYK) currently is a better pick compared to Boston Scientific stock (NYSE:BSX), despite Stryker being slightly more expensive of the two. Stryker trades at about 6.4x trailing revenues, compared to 5.7x for Boston Scientific. Although both the companies have seen a fall in demand for medical devices and supplies during the pandemic, due to fewer surgical procedures, Stryker’s financial performance has been better over the recent past. However, there is more to the comparison. Let’s step back to look at the fuller picture of the relative valuation of the two companies by looking at historical revenue growth as well as operating margin growth. Our dashboard Boston Scientific vs Stryker: Industry Peers; Which Stock Is A Better Bet? has more details on this. Parts of the analysis are summarized below.

1. Stryker’s Revenue Growth Has Been Better

Looking forward, Stryker is expected to see strong revenue growth with its Wright Medical acquisition (completed in Nov 2020).  The Wright acquisition will help strengthen Stryker’s position in the fast-growing trauma and extremities segment. For Boston Scientific, its popular Left Atrial Appendage Closure (LAAC) device – Watchman – will now face competition from Abbott’s Amulet (LAAC device), which received the U.S. FDA approval in August this year. For perspective Watchman sales alone were expected to be $1 billion over the next couple of years, but the growth may slow as Amulet will also gain some market share. With economies now opening up, the demand for medical devices is likely to remain high in the near term, but it will normalize after the backlog of procedures is cleared. Our Boston Scientific Revenues dashboard provides more insight on the company’s revenues.

Now that over half of the U.S. population is fully vaccinated against  Covid-19, with overall economic activity picking up, the demand for medical devices and supplies is likely to rise going forward, boding well for both the companies. For Boston Scientific, there is increased competition, which may impact its overall pace of revenue growth, while for Stryker, the integration with Wright is expected to bolster its top-line growth.

Covid-19 is proving more difficult to contain than initially thought, due to the spread of more contagious virus variants and infections in the U.S. are higher than what they were a few months back. This may result in continued pressure on margins in the near term. While Boston Scientific’s current valuation is surely more attractive than that of Stryker, with BSX stock trading at about 5.7x trailing revenues, versus 6.4x for Stryker, the latter has demonstrated better revenue growth and margin expansion over the last few years. Not only that, even if we were to look at financial risk, Stryker’s 13% debt as a percentage of its equity is slightly below the 14% figure for Boston Scientific, but Stryker’s 7% cash as percentage of assets is lower than the 9% figure for Boston Scientific, implying that Stryker has better debt position but Boston Scientific has more cash cushion. Overall, Stryker trumps Boston Scientific in most of the metrics that matter for investors and we think this gap in valuation between SYK and BSX is largely justified. In fact, looking forward, it is likely that the gap in valuation of these two companies will remain in the foreseeable future and Stryker may continue to outperform with its better growth prospects and no extra risk.

While SYK stock may see higher levels, 2020 has created many pricing discontinuities which can offer attractive trading opportunities. For example, you’ll be surprised how counter-intuitive the stock valuation is for Abbott vs. Corcept.
Invest with Trefis Market-Beating Portfolios
See all Trefis Price Estimates 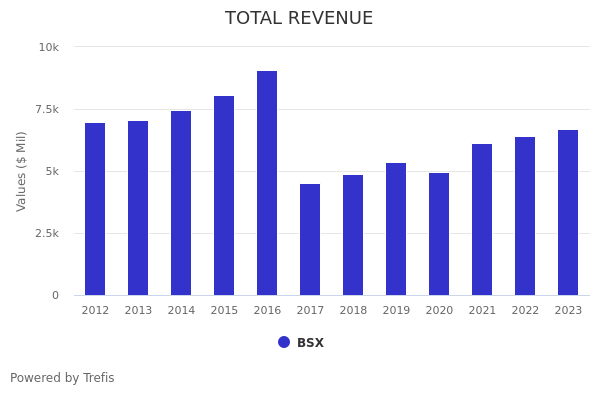 What To Expect From Boston Scientific Stock Following Q1 Earnings?

Company Of The Day: Boston Scientific

Is Boston Scientific Stock A Good Buy At $43?

What To Expect From Boston Scientific Stock Following Q4 Earnings?

Should You Buy Boston Scientific Stock Over Its Industry Peer?

Forecast Of The Day: Boston Scientific’s Revenue From Peripheral Interventions

What To Expect From Boston Scientific Stock In Q3?

Forecast Of The Day: Boston Scientific