Anadarko Petroleum (NYSE:APC), the US-based independent exploration and production (E&P) company, posted a strong improvement in its December quarter and full year financial results((Anadarko Announces December Quarter 2017 Results, 6th February 2018, www.anadarko.com)), backed by the recovery in the commodity prices during the year. However, unlike its competitors, the company continued to make adjusted losses for the year. That said, the oil and gas producer witnessed an improvement in its cash flows, which enabled it to increase its quarterly dividend as well as share repurchase program for 2018. Further, the company will continue to focus on the three Ds in its portfolio — the Delaware basin, the DJ basin, and the deepwater assets in the Gulf of Mexico (GOM) — that will drive its value going forward. We have a price estimate of $53 per share for Anadarko’s stock, which is 10% below the current market price. We will update our model shortly to reflect the company’s 2017 results and guidance for 2018 and beyond. 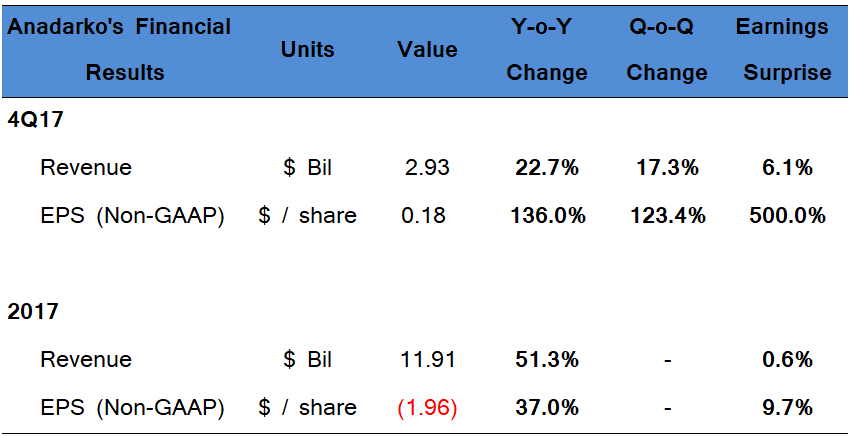 You can create your own forecasts about Anadarko’s results and visualize their impact on its stock price using our interactive platform.

Like our charts? Explore example interactive dashboards and create your own

How Will Anadarko Perform In 2019?

Anadarko Has Been Trading At A 52-Week Low. Where Will It Head Going Into 2019?

What To Expect From Anadarko’s Second Quarter Results

What To Expect From Anadarko’s Q1 2018 Results

How Is Anadarko Petroleum Corp Likely To Grow In The Next 2 Years?