How could the retirement of baby boomers, affect a railroad company? In our opinion, as baby boomers retire, the loss of a substantial portion of the US workforce will weigh on growth in the US economy. Since the success of railroads is correlated with overall economic health, we could see firm’s such as Union Pacific (NYSE:UNP) struggle to maintain top-line revenue growth and profitability. In this article we will examine US demographic factors, their effect on UNP’s revenues, and what management can do to maintain the bottom line.

How will demographic growth affect the US economy?

The retirement of the baby boomers from the US economy will lead to a big decrease in the number of individuals in the US labor force over the next decade or so. According to US 2010 Census data, the number of people aged 45 – 65 has increased to represent 26% of the total US population, up from 22% in 2000. [1] While this might not seem a big change in relative terms, in absolute terms this segment of the population has increased by 20 million over the last 10 years, an increase of 31.5%. This, combined with the 15.1% increase in the number of individuals 65 and over, leaves a large proportion of the US population close to ending their working lives.

Since economic activity is positively correlated with the size of the labor force, a decrease in the size of the labor force due to a high number of retirees will provide downward pressure on the US economy. Due to these demographic trends, economists suggest that the US economy won’t be able to grow at levels that it achieved over the last few decades over the long term. [2]

Historically, the well being of the rail industry has been correlated with the US economy. Warren Buffet, during his buyout for Burlington Northern Santa Fe, Union Pacific’s direct competitor, stated that they buyout was a bet on the economic growth of America. [3]

However, with demographic trends signaling a possibility of subdued economic growth in the United States, we could see freight revenues fall over the coming years. Specifically, coal and industrial freight is likely to fall as the coal prices and economic manufacturing are also both correlated with the US economy as a whole.

To maintain top-line growth, UNP will have to ensure that it is able to raise prices if as freight volumes fall, a task that it accomplished well during the third quarter. If it is unable to do this, the pressure on overall revenues would decrease profitability.

What must UNP do to maintain profitability

In our opinion, the best way for Union Pacific to maintain profitability and possibly improve its earnings is to cut costs as rail volumes decline. The company did a great job of this in the third quarter, during which it posted a quarterly record operating ratio of 66.6, which declined 2.5 percentage points year-over-year. This is operating expenses over operating revenue, and we place a lot of value on this metric because as a slow US economy impacts UNP’s freight revenues an offsetting cut in costs will help the firm maintain profitability.

Do demographic trends present any bright spots for UNP?

As baby boomers retire, we could see greater economic activity in areas popular with retirees such as Arizona, New Mexico and California. If this materializes, it could present railroads with an opportunity to drive intermodal growth in these regions since UNP’s network is primarily spread west of the Mississippi river, and connects to these regions quite well.

While we acknowledge there are several other factors at play in driving economic growth, demographics and the size of the labor force certainly will certainly play a role.

We currently have a $129 price estimate for UNP, which is approximately 6% above the current market price. 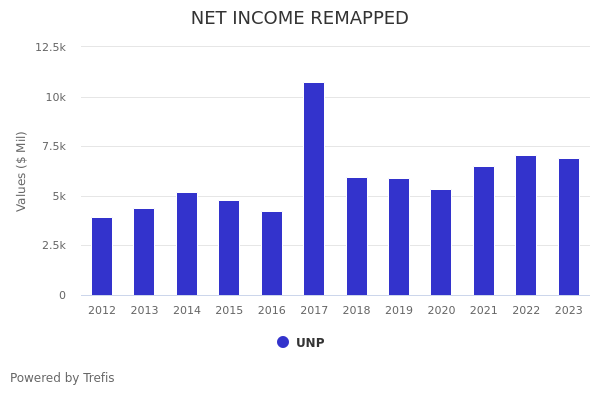 Why Union Pacific Stock Moved: UNP Stock Has Gained 55% Since 2018 Primarily Due To Favorable Change In Price To Sales Multiple (P/S)

What To Expect From Union Pacific’s Q3?