Under Armour (NYSE: UA), a sports equipment company that manufactures footwear, sports and casual apparel, is scheduled to report its fiscal fourth-quarter results on Wednesday, February 10. We expect Under Armour to trade lower due to weak fiscal Q4 2020 results with revenues as well as earnings missing consensus. While the cost-cutting initiatives are looking good for the retailer’s recovery from the disruptions in supply chains and retail store closures, the top-line decline in the North American market remains a key issue in the near term.

Our forecast indicates that Under Armour’s valuation is around $17 a share, which is 6% lower than the current market price of around $18. Look at our interactive dashboard analysis on Under Armour‘s Pre-Earnings: What To Expect in Q4? for more details.

(1) Revenues expected to be below consensus estimates

Trefis estimates UA’s Q4 2020 revenues to be around $1.23 Bil, 2% below the consensus estimate of $1.25 Bil. In the first nine months of 2020, the company’s revenues declined 20% year-over-year (y-o-y) as its bottom line slipped into a loss. By geography, North America led the decline at 25% y-o-y, followed by Latin America at 23% y-o-y, and Asia-Pacific at 12% y-o-y. Going forward, we expect longer-term traffic declines across malls, along with continued challenges in the North American wholesale channel to continue to pressure Under Armour’s revenues in the upcoming Q4. UA expects its revenue to decline by a high-teen rate for the full year, with declines in both its domestic and overseas markets. 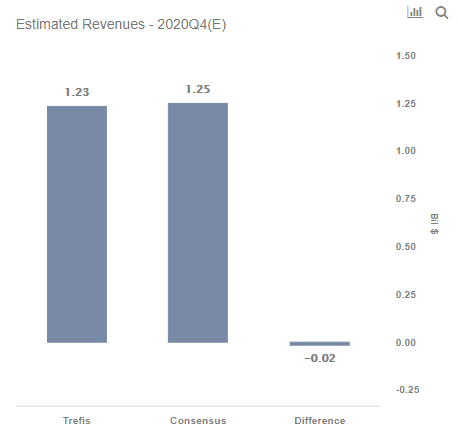 2) EPS also likely to be below consensus estimates

UA’s Q4 2020 earnings per share (EPS) is expected to be a loss of 6 cents per Trefis analysis, below the consensus estimate of a loss of 5 cents. Under Armour’s direct-to-consumer business makes up more than one-third of the company’s revenues and grew 17% y-o-y in Q3. It should be noted that a higher percentage of sales in digital hurts the company’s bottom line as it still has to pay for its under-utilized retail locations along with the added cost of shipping online.

For the full-year, we expect Under Armour’s revenues to decline 20% y-o-y to $4.3 billion.

Going by our Under Armour’s Valuation, with a revenue per share (RPS) estimate of around $9.51 and a P/S multiple of 1.8x in fiscal 2020, this translates into a price of $17, which is 6% lower than the current market price of around $18.

While Under Armour stock may not be attractive now, 2020 has created many pricing discontinuities that can offer attractive trading opportunities. For example, you’ll be surprised how counter-intuitive the stock valuation is for Amazon vs Etsy.

What To Expect From Under Armour’s Stock Post Transition Quarter?

Under Armour To See More Gains?

Will Under Armour Stock See Higher Levels Following Its Q4?

Forecast Of The Day: Under Armour Wholesale Apparel Revenues

What To Expect From Under Armour’s Stock After Q3?

Does Under Armour Stock Look Attractive At $18?

Under Armour’s Stock Grew 13% In The Last Week – What’s Next?

What’s Happening With Under Armour Stock?

What To Expect From Under Armour’s Stock Post Q1 Release?

Under Armour Stock In Position For Further Gains?

Will Under Armour’s Recent Gains Be A Buying Opportunity?