Nike Inc. (NYSE:NKE)  is the largest manufacturer of athletic footwear, apparel and equipment worldwide by sales with close to $23 billion in revenues in 2011, far ahead of players like Adidas AG (FRA:ADS), Puma (ETR:PUM), K-swiss Inc. (NASDAQ:KSWS) and Steven Madden (NASDAQ:SHOO). Below we analyze how the upcoming sports tournaments in 2012 can drive Nike’s value in the near term.

With three big tournaments NFL Season 12, 2012 Summer Olympics and UEFA Euro 2012 lined up, we expect 2012 to be a very profitable year for Nike. Below we analyze each sporting event individually, deducing the potential impact that each event can have on Nike’s value.

The 2012 NFL Season is expected to be a big season for the company as Nike takes over a new five-year contract for exclusive jersey rights with the National Football League. Nike is believed to be paying nearly $35 million per year to take the contract away from Reebok, which has held it for the past 10 years.

Considering the enormous popularity of NFL in North America, we believe the NFL deal presents a significant upside opportunity for Nike’s apparel division. Trefis currently forecasts a 5% market share for Nike Brand Apparel in 2012. If the market share increases to 6%, there can be a 5% upside to Trefis price estimate for Nike.

The Olympics Games, which begins July 27 in London, is the biggest sporting event in the world, and we believe the mega event will be the perfect platform for Nike to drive its brands and showcase innovation through sponsorships of teams and individual athletes.

In terms of individual divisions, we expect Nike’s footwear division to be the biggest gainer from the 2012 Summer Olympics especially in the running category. The trend has been evident historically as during the 2008 Beijing Olympics Nike introduced Flywire and Lunar lines of footwear, which currently generates nearly $2 billion revenues annually.

The 2012 UEFA European Football Championship, which begins June 8, 2012, also presents a massive opportunity for Nike in the near term. The company sponsors 8 of the 16 countries represented in Euro 2012, wherein Nike sponsors national teams from France, Poland, Holland, Portugal and Croatia, and its recently acquired brand, Umbro, sponsors teams from England, Sweden and Ireland. As football is the most widely followed game outside the U.S, Nike can leverage the tournament to significantly increase its football footwear and apparel sales in Europe.

Trefis has recently revised its $114 price estimate for Nike’s stock, which is at a premium of 7% to its current market price.

Should You Buy Nike Stock At $122?
Visualize Related Companies:
Nike 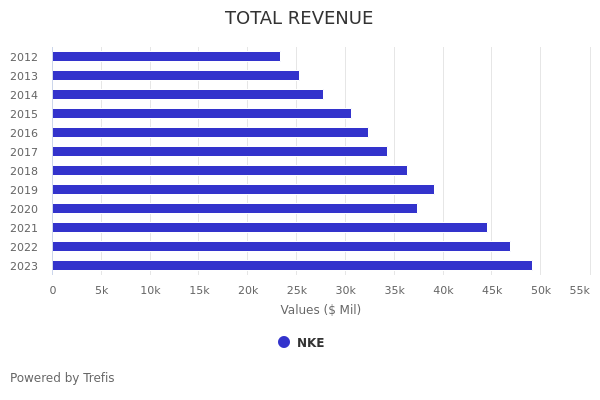