Despite a higher valuation, we think that Lululemon’s stock (NASDAQ: LULU) currently is a better pick compared to Nike’s stock (NYSE: NKE), given its better revenue and margins growth. Both companies benefited from the stay-at-home orders as customers favored athleisure and comfortable clothing for spending more time at home during the ongoing pandemic. While store closures and costs did weigh on both companies during the initial lockdowns of 2020, they still benefited from growing digital sales. But how is Lululemon’s stock priced compared to Nike’s stock? Lululemon trades at about 6x trailing revenues, compared to 4x for Nike. While Lululemon’s stock appears overvalued compared to Nike’s stock, given the notable mismatch in their current P/S multiples, we still believe it is a better pick between both of the companies. This is based on comparing the revenue growth and operating margins for the two companies over recent years. Lululemon’s premium valuation should not keep you away from investing in this high-performing stock, which has demonstrated growth in revenues while raising its profit margins in the past few years. But there is more to this comparison. Let’s step back to look at the fuller picture of the relative valuation of the two companies by looking at historical revenue growth as well as operating margin growth. Our dashboard Lululemon vs Nike: Industry Peers: Which Stock Is A Better Bet? has more details on this. Parts of the analysis are summarized below.

1. Lululemon’s Revenue Growth Has Been Stronger

Lululemon’s top line grew 30% year-over-year (y-o-y) to 1.5 billion in its most recent quarter (Q3 2021), whereas Nike’s revenues grew marginally to $11.4 billion during the same period (Q2 2022). While global supply chain woes have severely hurt apparel businesses, Lululemon appears to be in a better place than Nike. Lululemon’s y-o-y revenue growth was driven by a 28% increase in North America and a 40% increase internationally, whereas Nike saw falling revenues in Greater China (-20% y-o-y) and the Asia Pacific & Latin America (-8%), while North America (+12%) and Europe, the Middle East, & Africa (EMEA, +6%) delivered growth during the quarter. While Nike saw its gross margin increase 280 basis points to 46% in the recent quarter – driven by margin expansion in the NIKE Direct business – it was still roughly 10 percentage points lower than its rival Lululemon with a gross margin of 57%. That said, Lululemon is finding strong demand in categories like outerwear and menswear, and it has only started tapping the potential in markets like China.

In the upcoming quarter, supply chain issues that hit its factories in Vietnam and Indonesia will continue to pressure Nike’s top line. It should be noted that almost 51% of Nike’s footwear and 30% of its apparel is made in Vietnam. In addition, increased investments in air freight to overcome supply chain and inventory challenges will also increase costs significantly in the second half. Moreover, commodities prices from the Russia-Ukraine conflict will also clip sales for Nike, particularly in Europe. Similarly, Lululemon is expecting its net revenue to come in at the low end of its previously forecast range of $2.125 billion to $2.165 billion in Q4. The company blamed Omicron, supply problems, and staff shortages for this weaker performance.

As mentioned above, Lululemon has a significantly higher gross margin than Nike. Similar to the pattern seen in revenue growth, Lululemon’s operating margin of 4.4% over the last twelve-month period is better than 3.4% for Nike’s. However, if we were to look at the last three fiscal year change in operating margin, Lululemon’s -16% figure is worse than Nike’s -9% change. Lululemon saw higher acquisition-related expenses in 2020, which explains this operating margin contraction. Going forward, we expect margins for both companies to face some headwinds in the near term, given the inflationary pressure and supply chain restrictions.

We see that the revenue growth, as well as profitability, has been better for LULU in the last twelve months but it is available at a higher valuation compared to NKE. Now, looking at future prospects, using P/S as a base, due to high fluctuations in P/E and P/EBIT, we believe LULU is currently the better choice of the two. The table below summarizes our revenue and return expectation for LULU and NKE over the next three years, and points to an expected return of 50% for LULU over this period vs. a 12% expected return for NKE, implying that investors are better off buying LULU over NKE, based on our dashboard Lululemon vs Nike – which also provides more details on how we arrive at these numbers. 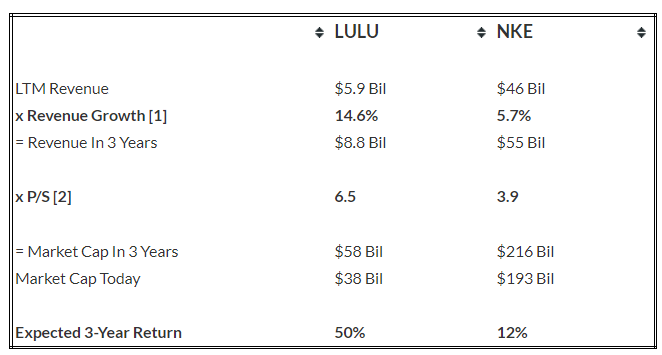 While Lululemon stock may currently be a better pick as compared to Nike’s, there is a particular stock that looks like a Better Bet than LULU Stock. Also, LULU Peers shows how Lululemon compares against its peers on metrics that matter. You will find other useful comparisons for companies across industries at Peer Comparisons.

lululemon athletica vs. Fashion Stocks: Which Is A Better Investment?

lululemon athletica vs. Large Cap Stocks: Which Is A Better Investment?

lululemon athletica vs. Sports Stocks: Which Is A Better Investment?

What Drove the 65.6% Net Income Change for lululemon athletica in FY2021?

What To Expect From Lululemon’s Stock Past Q1 Earnings

Forecast Of The Day: Lululemon’s Direct To Consumer Revenue

What’s Next For Lululemon’s Stock?

Company Of The Day: Lululemon Athletica

Forecast Of The Day: Lululemon’s Direct to Consumer Revenues