Microsoft (NASDAQ:MSFT) announced that it will enter into a patent cross-license agreement with Amdocs Software Systems Ltd. The cash changing hands has not been disclosed, but it is an agreement in which Amdocs will pay Microsoft for its use of Linux-based servers in its data center. [1] While this is a small deal for Microsoft overall, it highlights a new source of revenue for the company in recent years; the licensing patents for fees.

Check out our full analysis of Microsoft here

Microsoft launched its Intellectual Property (IP) licensing program in 2003 and has since then entered into more than 1100 licensing agreements. These deals, in some instances, provide a recurring source of revenue and have helped subsidize loss producing products such as the Xbox (before the Kinect was introduced) and the Windows phone. For example, a deal last year with HTC and Samsung generates revenues as the two companies sell Android phones, a product in direct competition with the Windows phone. The two firms pay Microsoft a licensing fee for its patents on each handset they sell; $10 per phone by HTC and an estimated $12-13 per phone by Samsung. [2]

Although exact figures haven’t been released, this lucrative deal tied to Android sales has probably generated more revenues for Microsoft than the sales of its own Windows 8 based smartphones. Microsoft’s Windows phone partner Nokia (NYSE:NOK) has been struggling to sell its phones and has been eclipsed by Samsung in worldwide market share. [3] Microsoft subsidizes Nokia by giving it approximately $250 million a quarter but in return only gets approximately $20 per phone sold.

On the other hand, Microsoft does not have to subsidize the Android phones sold by HTC or Samsung and that in itself saves the company $1 billion per year, which it can invest in other project or return to shareholders. In our model these licensing revenues are part of the Windows Phone, PC Games & Other segment, and you can assess the impact that an increase in these revenues will have on Microsoft’s value by using the tool below:

Overall, we are encouraged by the fact that Microsoft is able to monetize its intellectual property in ways that help subsidize other aspects of its business. This trend should increase innovation in the company since these patents can not only generate significant revenues via licensing fees, but could also help provide the next blockbuster product for the company. Additionally, if the Windows phone does take off, Microsoft can generate substantial revenues from the smartphone sales of the world’s two largest handset makers, Nokia and Samsung.

Trefis currently has a $41.38 price estimate for Microsoft, which is approximately 40% above the current market price. 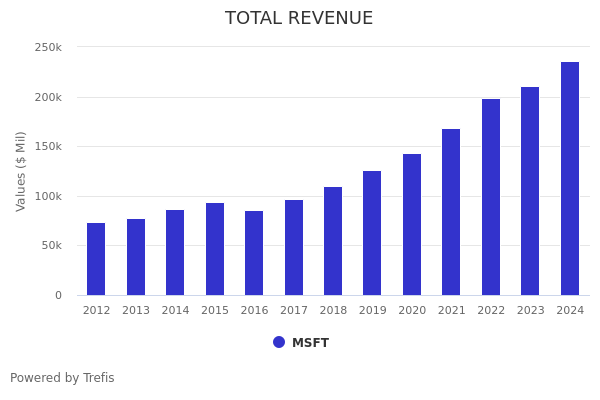 Microsoft Stock To Edge Past Consensus In Q2?

Microsoft Stock Lost 7% In One Week, What To Expect?