Having gained close to 150% since the March 23 lows of the last year, Morgan Stanley stock (NYSE: MS) is trading 23% above its pre-Covid peak in February 2020. That said, we believe that it has more scope for growth. Trefis estimates Morgan Stanley’s valuation to be around $78 per share – around 15% above the current market price. Morgan Stanley is one of the top five U.S. investment banks and is a market leader in the equities trading space. Its strength in sales & trading was the primary reason for its positive growth in the year, which was also evident in the recently released fourth-quarter results. The bank reported better than expected results with total revenues of $13.6 billion – up by 26% y-o-y. Sales & Trading revenues jumped by 32% y-o-y coupled with a 46% growth in the investment banking segment. Notably, Wealth Management revenues grew 24% y-o-y in Q4, driven by the E*TRADE acquisition – E*TRADE was integrated with the wealth management segment at the start of October 2020.

Morgan Stanley reported revenues of $48.2 billion for the full year 2020 – up 16% y-o-y. It was primarily driven by 27% y-o-y growth in the Institutional Securities segment, which includes both sales & trading (up by 37%) and investment banking (up by 26%) businesses. The bank has a strong sales & trading arm, which benefited from higher trading volumes in 2020. Similarly, its investment banking segment gained from a jump in underwriting deal volume. However, as the economic condition improves, higher trading and underwriting deal volumes are likely to normalize in the subsequent quarters. This is likely to hurt Institutional Securities revenues in FY2021. Despite this, positive growth in investment management and wealth management revenues are likely to take Morgan Stanley’s revenues to around $49 billion in FY 2021 – slightly above the 2020 figure.

Despite the Covid-19 crisis, the bank reported a 23% y-o-y improvement in its adjusted net income figure in 2020. The growth was partly due to higher revenues and partly driven by lower operating expenses as a % of revenues. This led to an EPS of $6.47 – up 25% as compared to 2019. However, we expect the net income margin to slightly suffer in FY2021, reducing the bank’s EPS figure to $6.06. Additionally, the bank is likely to start its share repurchase program from the first quarter of 2021. Overall, the EPS of $6.06 coupled with the P/E multiple of just below 13x will lead to a valuation of around $78.

In view of more than a 100% gain since the March bottom, we believe Morgan Stanley stock (NYSE: MS) has achieved its near-term potential. Trefis estimates Morgan Stanley’s valuation to be around $58 per share – marginally below the current market price. The company has benefited from strength in its sales & trading arm, which has delivered better than expected results over the recent quarters. In its recently released third-quarter 2020 results, Morgan Stanley surpassed the consensus estimates and reported total revenues of $11.66 billion – up 16% y-o-y, mainly driven by a 35% y-o-y jump in sales & trading revenues coupled with an 11% growth in the investment banking segment.

We expect the bank to report $44.3 billion in revenue for FY 2020 – 7% more than the year-ago period. However, its net income is likely to remain around the previous year level due to higher operating expenses, slightly improving the EPS figure to $5.24 for FY 2020. Thereafter, Morgan Stanley’s revenues are expected to decline to $43.8 billion in FY2021, mainly driven by a drop in investment banking and sales & trading business. The investment banking giant has completed the acquisition of E*TRADE on 2nd October 2020 in an all-stock transaction, which will further add to its wealth management business. This is likely to improve the wealth management revenues in the subsequent year, partially offsetting the weakness in other segments. The EPS figure is likely to remain around $5, which coupled with the P/E multiple of just below 12x will lead to a valuation of $58.

There were two clear reasons for this – The Covid-19 outbreak and economic slowdown meant that market expectations for 2020 and the near-term consumer demand dropped. This could cause significant losses for businesses and individuals alike, impacting their loan repayment capability and exposing Morgan Stanley to sizable wealth management loan losses. The multi-billion-dollar Fed stimulus provided a floor, and the stock recovery owes much to that.

Trefis estimates Morgan Stanley’s valuation to be around $58 per share – about 15% above the current market price – based on an upcoming trigger explained below and one risk factor.

The trigger is an improved trajectory for Morgan Stanley’s revenues over the second half of the year. We expect the company to report $42.4 billion in revenues for 2020 – 2.4% higher than the figure for 2019. Our forecast stems from our belief that the economy is likely to open up in Q3. Further, as the lockdown restrictions are easing in most of the world, consumer demand is likely to pick up too. The company has derived positive growth in Q1 and Q2 mainly due to strength in its trading arm, followed by higher investment banking revenues. This jump could be attributed to the Fed stimulus, which set the floor for businesses to raise corporate debt, benefiting both underwriting business and the sales & trading division of the bank. This has largely offset the impact of weak revenues in other segments. While the trading income is expected to decline as compared to the first two quarters, it is likely to drive positive growth in the second half as well. Overall, we see the company reporting an EPS in the range of $4.92 for FY2020.

Thereafter, Morgan Stanley’s revenues are expected to slightly drop to $42 billion in FY2021, mainly due to a drop in the sales & trading business. Further, the bank has regularly invested in share repurchases and is likely to buy back stock close to 2019 levels, leading to an EPS of $5.02 for FY2021.

Finally, how much should the market pay per dollar of Morgan Stanley’s earnings? Well, to earn close to $5.02 per year from a bank, you’d have to deposit about $555 in a savings account today, so about 110x the desired earnings. At Morgan Stanley’s current share price of roughly $51, we are talking about a P/E multiple of just above 10x. And we think a figure closer to 12x will be appropriate.

That said, Investment Banks are riding on the wave of higher trading volume and growth in underwriting deals, which is a volatile business. Growth looks less promising, and long-term prospects are less than rosy. What’s behind that?

The economic downturn could cause significant losses for businesses and individuals alike, impacting their loan repayment capability. This could result in sizable losses for Morgan Stanley, as it has a substantial loan portfolio of wealth management loans. The bank generated around 43% of its revenues from the wealth management business in 2019. Further, as the economy slows down, it will likely become expensive for the bank to attract funding, negatively impacting all its operations. We expect the bank’s net income margin to decline from 20.5% in 2019 to 17.7% by FY 2021.

The same trend is visible across Morgan Stanley’s peer – Citigroup. Its revenues are expected to benefit from positive growth in its trading arm and investment banking business in FY2020. However, its margins are likely to suffer due to build-up in provisions for credit losses in anticipation of bad loans. This would explain why Citigroup’s stock currently has a price of just below $53 but looks slated for an EPS of around $6.13 in FY2021. 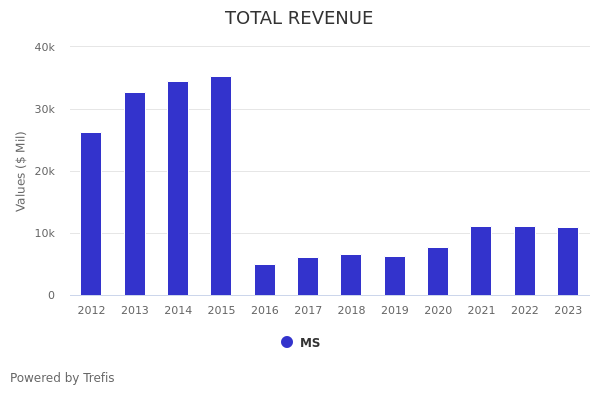 How Low Can Morgan Stanley Stock Go In A Market Crash?

Is Morgan Stanley Stock Attractive At the Current Levels?

After Mixed Results In Q4, Is Morgan Stanley Stock A Buy?

Morgan Stanley Stock Is Trading Close To Its Fair Value

Morgan Stanley Stock Is Trading Above Its Near Term Potential

Current Rally In Morgan Stanley Stock Is Not Sustainable

After A 150% Rise, Morgan Stanley Stock Is Unlikely To Continue