Eli Lilly stock (NYSE: LLY) has seen a 21% rise this year, significantly outperforming the broader S&P500 index, down 21%. Even if we look at the longer term, LLY stock, with a stellar 188% return from levels seen in late 2018, has outperformed the S&P 500 index, up nearly 50%. However, LLY stock now looks fairly valued at around $330, as discussed below.

Eli Lilly’s revenue growth over the recent years has been driven by market share gains for some of its drugs, such as Trulicity, Verzenio, Jardiance, and its Covid-19 antibodies. The company recently secured U.S. FDA approval for its diabetes drug – Tirzepatide – which is expected to garner over $5 billion in peak sales. Eli Lilly has a robust product cycle, including Alzheimer’s treatment – Donanemab – one of the most anticipated drugs with peak sales pegged as high as $10 billion.

Not only has Eli Lilly seen good revenue growth, but it has also posted a consistent rise in operating margins from 17.0% in 2018 to 24.5% over the last twelve months. Our Eli Lilly Operating Income dashboard has more details.

Given the company’s strong prospects with Tirzepatide and Verzenio, its revenue is expected to see over 16% growth this year to $29.7 billion (per the consensus estimate). Assuming the current share count of 900 million (reported for Q2 2022), we arrive at the expected revenue per share of $32.94 for the full year 2022. At its current levels, LLY stock is trading at 10.1x forward expected revenues, compared to the last three-year average of 6.3x.

Now, given the positive data from clinical trials of Lecanemab, investors are assigning a higher probability of success for Eli Lilly’s Donanemab. As such, an upward revision in trading multiple makes sense. However, now that LLY stock has already rallied 21% this year (vs. a 21% fall in the broader markets), and its P/S multiple is higher than the historical average, we don’t expect significant growth from the current levels. That said, any positive development from Eli Lilly on its pipeline drugs will surely bode well for its stock.

While LLY stock has already seen a rally, it is helpful to see how Eli Lilly’s Peers fare on metrics that matter. You will find other valuable comparisons for companies across industries at Peer Comparisons.

Furthermore, the Covid-19 crisis has created many pricing discontinuities, which can offer attractive trading opportunities. For example, you’ll be surprised at how counter-intuitive the stock valuation is for Corcept Therapeutics vs. Amerco. 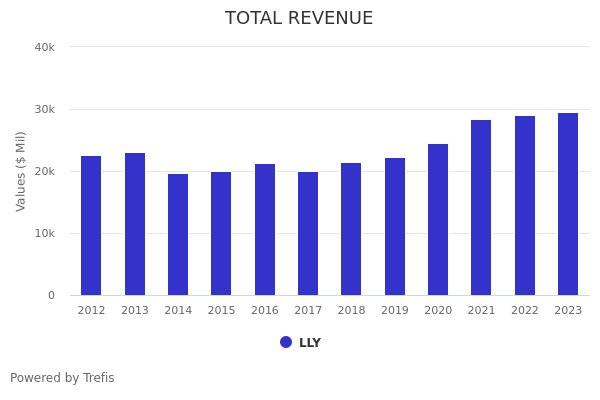 Better Bet Than LLY Stock: Pay Less Than Eli Lilly and Company To Get More From Industry Peers HZNP, PFE