Amid the high and lows, Intel (NASDAQ:INTC) has managed to retain its supremacy in the semiconductor industry for twenty consecutive years. The company gained a record market share of 16.5% last year, once again beating competitors Qualcomm (NASDAQ:QCOM) and Nvidia (NASDAQ:NVDA). [1]

However, owing to unfavorable trends – macro weakness, the slowdown in global PC shipments, growing dominance of smartphones & tablets – Intel’s stock has been facing a downward pressure. Peaking at $29 in May this year, the stock has declined by almost 32% since then. Its market cap is now lower than that of Qualcomm, which accounted for 3.3% share in the global semiconductor market in 2011. [1]

While we agree that macro headwinds and the increasing shift towards mobile devices may impact Intel’s short-term growth, we believe the company continues to have strong fundamentals to support a higher long-term valuation.

The computing world is in the midst of a period of creativity and innovation and we believe that Intel has the potential to remain the frontrunner in the global technology revolution. Our price estimate of $32.88 for Intel is at a considerable premium to the current market price.

Here we list certain key factors and trends that could have a significant impact on Intel’s valuation.

See our complete analysis for Intel

Intel derives around 63% of its valuation from the PC market, as per our estimates. While the company derives close to 70% of its revenue from the PC business, the same accounts for close to 80% of Intel’s operating profit, making it the most profitable division in the company’s portfolio. Thus, Intel is extremely vulnerable to any extreme development in the PC domain.

The slowing enterprise market, consumer softness in mature markets (US and Western Europe), slowing demand growth from emerging markets, operating system transitions and cannibalization by tablets are some of the main factors leading to the current slump in PC shipments. Research firm IDC predicts the global PC market to grow by a mere 0.9% in 2012. [2]

In light of the uncertain macro environment, Intel’s customers are maintaining a lean inventory which in turn leads to lower demand for its microprocessors. Foreseeing the weak demand to persist in the current quarter, Intel intends to maintain lower factory utilization rates throughout the quarter and targets reducing its inventory level by almost $0.5 billion. The company saw its inventory increase by approx. $400 million in Q3 2012.

The Windows 8 OS transition was touted as one of the reasons holding back PC demand. However, so far Windows 8 sales have failed to meet Microsoft’s internal projection. While this could be detrimental to the projected global PC growth this year, we feel there are a number of other factors that could fuel demand for Intel inspired PCs in the future.

In the coming months, Intel plans to introduce more than 140 core-based Ultrabooks, more than 40 of which will be touch enabled. Aiming to combine the productivity of a PC with the convenience of a tablet, Intel intends to launch a dozen convertible Ultrabook designs. At the same time, the company is also working to bring down the incremental cost of touch-enabled Ultrabooks. Many of the upcoming Ultrabook designs are slated to hit the mainstream $699 price point while some could even be below that number.

We feel the upcoming innovative designs and a lower price point could help steer Ultrabook demand for Intel in the future. However, with the expected entry of ARM based players in the PC market later this year, we estimate a marginal decline in Intel’s market share by the end of our forecast period.

With the slowdown in PC shipments growth rate and the increasing adoption of mobile devices, smartphones and tablets are slated to fuel future growth in the semiconductor industry. Determined to be the frontrunner in the global technology revolution and focused to stay abreast of changing consumer preferences, Intel marked its entry in the lucrative smartphone and tablet markets earlier this year. However, the company has yet to make a significant dent in the same.

The smartphone and tablet space is dominated by established ARM based players such as Qualcomm (NASDAQ:QCOM) and Nvidia (NASDAQ:NVDA) which together account for the majority of the mobile computing market and have a number of high profile design wins in their portfolio. (Read Our Article: How Big A Threat Can Intel Be To ARM’s Mobile Dominance?)

However, we feel that Intel has been faring well so far in this domain and claims to have a strong road-map for the future. It launched its new processor code-named Clover Trail (Atom Z2670) for use in tablets that feature Windows 8 OS, earlier last month. Additionally, it plans to launch more than 20 Atom-based tablets from leading OEMs in the current quarter. Intel’s upcoming Atom Z2580 promises to offer a better performance, battery life and experience over its predecessors.

We estimate an increase in Intel’s market share in this segment by the end our review period.

Within the semiconductor industry, Intel is known to have huge R&D capabilities. It is also the only chip maker with its own manufacturing, design and fabrication capabilities which makes it less dependent on other companies. Intel is looking at being one of the first companies to provide 22 nanometer (nm) and 14 nanometer solutions. The company claims to be on track to deliver 22nm SoCs to market in 2013 and aims to have 14nm SoCs in the market by 2014.

We feel that the advanced technological capabilities could give Intel an edge over the other players in the market. 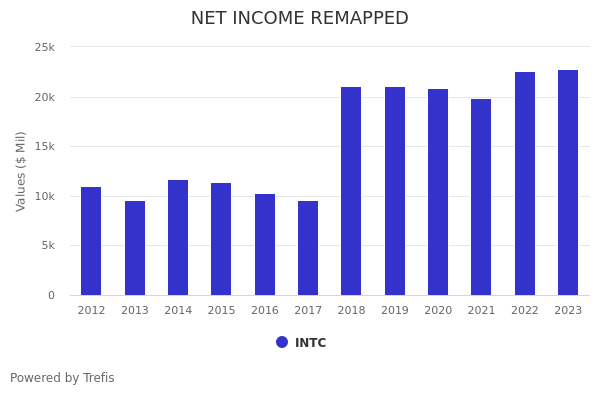 After Rough Month, Intel Stock Set For Come Back?

After A Strong Week, Can Intel Stock Sustain Its Performance?