Harley-Davidson stock (NYSE:HOG) has fared well this year, rising by almost 6% since early January, compared to the broader S&P 500, which remains down by close to 3%, and most other automotive stocks, which have declined by double-digit levels. The outperformance was driven by Harley’s better than expected Q4 2021 results, which saw the company grow revenue by 40% year-over-year to $1.016 billion, while posting a surprise profit, in what is typically a seasonally weak quarter. The company’s motorcycle shipments also rose to 29,075, up 38% versus a year ago. Investors have also been impressed by the way the company is managing inflationary pressure and supply chain challenges, via surcharges to its motorcycle pricing and better inventory management. Separately, the markets have also been pivoting toward more reasonably valued stocks and away from high-multiple, high-growth names as monetary policy gets tighter and this is also likely helping Harley stock. 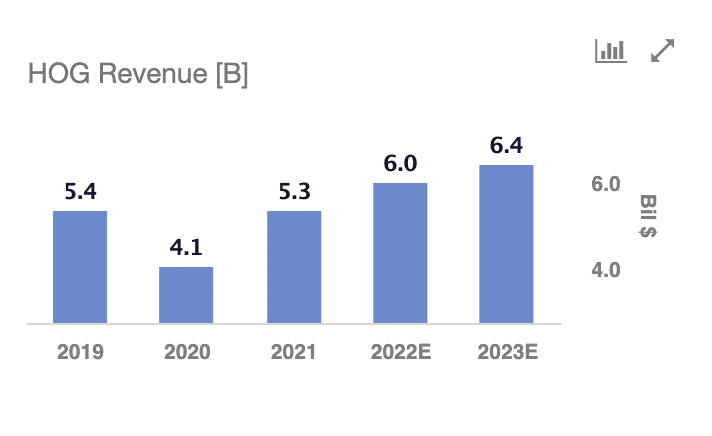 Despite the recent gains, we see the risk to reward positioning for Harley-Davidson as being very favorable at current levels. At about $40 per share, HOG stock trades at just about 9x projected 2022 earnings and about 8x projected 2023 earnings. Moreover, although the company saw flat to negative growth over the last several years, we expect Harley to grow revenue by over 10% in 2022 and by around 7% in 2023. The company is also emphasizing higher-margin motorcycles, eliminating new development of lower-margin bikes, while targeting low double-digit EPS growth through 2025, under its five-year “Hardwire” strategic plan. Harley is also increasingly betting on the electric bike space, via its LiveWire electric motorcycle business.  While LiveWire is expected to be spun off into a separate publicly listed company via a SPAC deal sometime this year, it will still be majority-owned by Harley. This could also have an overall positive impact on the company’s valuation. Harley’s Financial Services division is also poised for stronger growth in the near term, as rising interest rates and its push into financing for used motorcycles drive earnings.

We value HOG stock at about $54 per share, about 30% ahead of the current market price. See our analysis on Harley- Davidson Valuation: Expensive or Cheap for more details. Also, check out our analysis of Harley-Davidson Revenue for more information on the company’s key revenue streams and how they are trending.

Is Credit Suisse Stock Attractive At The Current Levels?

Better Bet Than HOG Stock: Pay Less Than Harley-Davidson To Get More From S&P 500 Stock PXD

Forecast Of The Day: Harley-Davidson Average Revenue Per Motorcycle

Which Stocks Are Better Than Harley-Davidson’s Stock?

Is Harley-Davidson’s Stock Above Near Term Potential?