GameStop Inc (NYSE:GME) has been facing challenges in the recent quarters and the sales have been declining for most of its segments. This can partly be attributed to higher revenues generated in 2017, led by the success of the Nintendo Switch console. However, looking forward, we forecast a mid-to-high single digit decline in the company’s revenues. The only segment where we expect revenue growth is the Digital Products, Retail & Technology Brands, which is seeing growth in Accessories and Collectibles sales. We have created an interactive dashboard analysis ~ What Is The Outlook For GameStop ~ that shows the company’s expected performance in fiscal 2018 and 2019. You can adjust the revenue and margin drivers to see the impact on the overall revenues, EPS, and price estimate.

Digital Products, Retail & Tech Brand Will Likely Grow In Mid-Single Digits In The Near Term 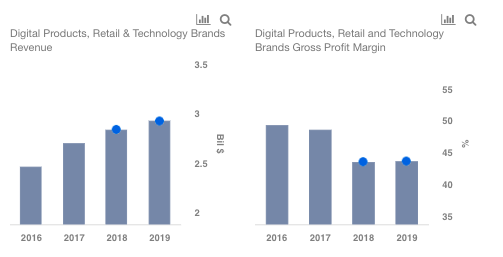 We expect Digital Products, Retail & Tech Brands segment revenues to grow in mid-single digits in the near term. This can primarily be attributed to the growth seen in Accessories and Collectibles sales in the recent quarters. The overall gaming industry is shifting to digital, and GameStop has built up long standing relationships with publishers, which allows it to maximize its offerings. Within the segment, Digital revenues have declined in high single digits while Technology Brands revenue saw a low double digit dip in the first half of 2018. While Accessories and Collectibles revenues grew around 20% during the same period, Collectibles gross margins declined amid lower pricing, and changes in the product mix. In fact, the Collectibles margins declined by 350 basis points in the previous quarter. This will likely put the pressure on the overall segment margins, which we forecast to decline in the near term.

We estimate GameStop’s Used Video Game revenues to decline in mid-single digits in fiscal 2018. This can be attributed to the absence of any major new titles being released. Also, there is not much of pre-owned inventory for the Nintendo Switch console, which itself is in high demand. We expect the segment to face revenue declines even in the long run. With the launch of new consoles, demand for older consoles will fade out eventually, given the change in technology, hardware, and newer games. Nintendo Switch is one such example, which gained popularity soon after its launch, and has sold over 20 million units so far. This has also aided GameStop’s New Video Game Hardware sales last year.

Overall, we expect the company’s revenues to decline to roughly $8.6 billion in fiscal 2018. An expected growth in Digital Products, Retail & Technology Brands will likely be more than offset by declines in other segments, which will have a tough comparison from last year. We forecast the company’s earnings of $3.00 per share in fiscal 2018, and maintain our price estimate of $15, which is roughly 10% below the current market price.

Will GameStop Stock Continue To Rise?

What’s Next For GameStop Stock After Rising 26% Last Week?

Can GameStop Stock Advance Continue After A 92% Surge In A Week?

Vaxart, Macy’s, Gogo: Will These Stocks See A GameStop Like Short Squeeze?

Time To Sell GameStop Stock After A 170% Rally?

How Is GameStop Likely To Have Fared In Q1?

What Are GameStop’s Key Sources of Revenue?