GameStop Inc’s. (NYSE:GME) key sources of revenues are Digital Products, Retail & Tech Brands, New Video Game Software, Pre-Owned Video Games, and New Video Game Hardware. While the company’s Digital Products, Retail & Tech Brands accounts for 29% of the company’s overall revenues, it accounts for over 45% of the company’s value, according to our estimates. This can be attributed to a higher expected proportion of revenues and profits from this segment in the coming years. We expect all other segments to see revenue decline in the near term. We have created an interactive dashboard analysis What Are GameStop’s Key Sources of Revenue that shows GameStop’s key revenue sources, and the expected 2018 and 2019 performance. You can adjust the revenue drivers to see the impact on the overall revenues, EPS, and price estimate.

Digital Products, Retail & Tech Brand Will Likely Grow At A Slow Pace In The Near Team 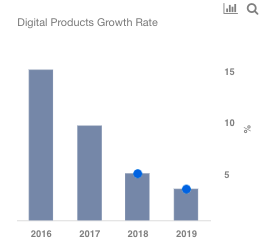 We expect Digital Products, Retail & Tech Brands segment revenues to grow in mid-single digits in the near term, and low-single digits in the long run. The overall gaming industry is shifting to digital. Casual gamers are turning toward mobile and tablet platforms. Publishers such as Electronic Arts and Activision Blizzard have cut down on the number of titles launched and are instead focusing on efficiency through the digital domain. GameStop sells digital downloadable content (DLC) mostly on the day of launch. The company has also built up long standing relationships with publishers which allow it to maximize its offerings. Beyond DLC, GameStop plans on expanding its technology brand business in the coming few years. Technology brands accounted for $803 million of revenues in 2017, and is expected to grow in the coming years. While the segment revenues grew in high teens during 2014-2016, the growth slowed to high-single digits in 2017. In Q1 2018, the segment revenues were flat (y-o-y). However, Technology Brands’ revenue on a standalone basis declined by 16%. The company attributed this decline to a slowdown in the wireless upgrade cycle. Given the headwinds, we expect only mid-single digit segment revenue growth in the near term.

We estimate GameStop’s New Video Games Hardware sales to decline in mid-teens in 2018. The overall industry hardware sales were up a solid 28% (y-o-y) to $4.71 billion in 2017, benefiting from launch of new consoles, primarily Nintendo Switch. The sales will likely cool in 2018, thereby impacting GameStop’s New Video Games Hardware segment. The New Video Games Software segment will likely see a mid-single digit decline in 2018, as there will be demand for games for new consoles. Also, there are a lot of sequels lined up for release, including Red Dead Redemption 2, Super Smash Bros., and Kingdom Hearts 3, in 2018. However, it may be difficult to match the overall sales generated in 2017, which benefited from blockbuster games, such as Nintendo’s Zelda: Breath of the Wild.  GameStop’s Pre-Owned Video Games revenue have been on a decline for the past three years. With the launch of new consoles, demand for older consoles fades out eventually, due to change in technology, hardware, and newer games. As such, we expect this trend to continue in the coming years, and forecast a low-single digit segment revenue decline. You can look at GameStop’s metrics, such as Pre-Owned Video Game Revenues, New Video Game Software Revenues, New Video Game Hardware Revenues, Digital Products, Retail & Tech Brands Revenues here.

Will GameStop Stock Continue To Rise?

What’s Next For GameStop Stock After Rising 26% Last Week?

Can GameStop Stock Advance Continue After A 92% Surge In A Week?

Vaxart, Macy’s, Gogo: Will These Stocks See A GameStop Like Short Squeeze?

Time To Sell GameStop Stock After A 170% Rally?

How Is GameStop Likely To Have Fared In Q1?

Expect GameStop Revenues To Trend Lower In The Near Term