Expedia (NASDAQ: EXPE), a travel company providing everything from airline tickets, hotel rooms, car rentals, to cruises, is scheduled to announce its fiscal second-quarter results on Thursday, August 5. We expect Expedia’s stock to likely trade higher due to revenues and earnings beating consensus estimates. Expedia saw a slower decline (as compared to a steep fall last year) in retail, reflecting improvements in leisure travel trends in Q1, particularly in North America. In addition, it saw a 10% increase in revenue per room night in Q1, as it benefited from an increase in the percentage of alternative accommodation (Vrbo) stayed room nights, which have a higher revenue per room night. Although Expedia does not break out Vrbo numbers, the company’s management reported that it benefited from its vacation rental business and domestic business in the U.S. in Q1. Having said that, Covid-19-related restrictions relatively eased in the U.S. during Q2, which accounts for 67% of total Expedia revenues – signaling an improving trend going forward. While Expedia still has a long way to grow its operating metrics similar to 2019 levels, mass vaccinations are definitely helping the travel industry to recover. To add to this, Expedia also announced its intention to sell its corporate business arm, Egencia, to focus better on its core technology and B2B business. This sell-off is a part of Expedia’s move to further streamline operations.

Our forecast indicates that Expedia’s valuation is $184 per share, which is 19% higher than the current market price of around $155. Look at our interactive dashboard analysis on Expedia Pre-Earnings: What To Expect in Q2? for more details.

(1) Revenues expected to be ahead of the consensus estimates 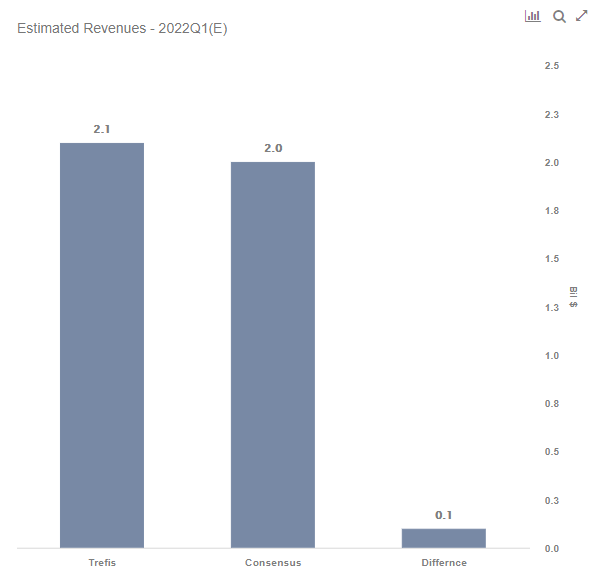 Expedia’s Q2 2021 earnings per share (EPS) is expected to come in at a loss of $-0.50 as per Trefis analysis, marginally better than the consensus estimate of -$0.65. The travel company reported earnings at a loss of $4.17 in Q1 as compared to a loss of $9.24 in the same period last year. In the long term, Expedia needs to address its $4.6 billion negative free cash flow in 2020 that compares to $1.6 billion in positive free cash flow the previous year. So, it needs to generate at least $6 billion to return to normalcy, of which it totaled $2 billion in Q1. While Expedia still has $4.3 billion in unrestricted cash and short-term investments and $2 billion in an untapped revolver capacity, reducing its large debt of $8.5 billion will rely heavily on the company’s post-pandemic recovery.

It is helpful to see how peers stack up. EXPE Stock Comparison With Peers for how Expedia compares against peers on metrics that matter.

Can Sabre’s Stock Rise After A 10% Fall Last Week?