CSX Corporation (NYSE: CSX) recently reported its Q4 results, which were comfortably above our estimates. The company reported revenue of $3.4 billion (up 21% y-o-y), better than our forecast of $3.2 billion and consensus estimate of $3.3 billion. CSX’s EPS of $0.42 was up 27% y-o-y, and it was slightly above our forecast of $0.40 and consensus estimate of $0.41. All three key segments – Merchandise, Coal, and Intermodal saw revenue growth. Our dashboard on CSX’s Revenues offers more details on the company’s segments.

That said, the sudden spike in Q4 took the investors by surprise. A 2x rise in fuel expenses, and a 44% jump in purchased transportation costs drove the operating expenses higher. Given the company’s track record in successfully bringing down its operating ratio over the last few years, we believe that this jump in Q4 is not going to be a long-term trend, and investors can use the current dip in the CSX stock as a buying opportunity for higher gains in the long run.

We have also updated our model following the company’s recently announced Q4 results. We have revised our CSX’s Valuation to be around $41 per share (vs. $37 earlier) which is 20% above the current market price of $34. This represents a P/E multiple of 21.5x for the company based on our EPS forecast of $1.89 for CSX in 2022.

CSX Corporation (NYSE: CSX) is scheduled to report its Q4 2021 results on Thursday, January 20. We expect CSX to post revenue and earnings slightly below the consensus estimates. That said, overall revenue will likely see y-o-y growth in mid teens, led by an expected increase in coal transportation as well as a rebound in merchandise freight. However, the margins in Q4 may face some pressure due to inflationary headwinds and rising labor costs. Not only do we believe CSX will post Q4 results slightly below the street expectation, we find CSX stock to be fully valued at the current levels of $36, with limited room for growth. Our interactive dashboard analysis on CSX Corporation’s Pre-Earnings has additional details.

(1) Revenues expected to be slightly below the consensus estimates

Trefis estimates CSX’s Q4 2021 revenues to be around $3.25 billion, slightly below the $3.32 billion consensus estimate. CSX will likely see higher freight revenues from all of its segments – Coal, Intermodal, and Merchandise, driven by economic growth. The company’s 24% revenue growth in Q3 was driven by a 39% jump in coal freight, 14% growth in intermodal, and 7% rise for merchandise freight. The company’s largest segment – merchandise freight – likely saw strong growth in Q4 given the economic growth. However, a drop in natural gas prices in Q4 due to rising output and the spread of Omicron may impact the overall sales growth in Q4 and Q1. Our dashboard on CSX Corporation’s Revenues offers more details on the company’s segments.

(2) EPS also likely to be marginally below the consensus estimates

CSX’s Q4 2021 earnings per share (EPS) is expected to be $0.40 per Trefis analysis, just one cent below the consensus estimate of $0.41. CSX’s net income of $968 million in Q3 2021 reflected a 31.5% growth from its $736 million figure in the prior-year quarter. This can be attributed to higher revenues and a 50 bps drop in operating ratio to 56.4%. Looking forward, inflationary pressure and rising wages likely impacted the company’s margins in Q4. The impact may be minimal if the company successfully passes on the increased costs to the customers during the contract renewals in Q4 and Q1. That said, for the full-year 2022, we expect the EPS to be higher at $1.76, compared to $1.20 in 2020 and an expected EPS of $1.53 in 2021.

We estimate CSX’s Valuation to be around $37 per share which is in-line with the current market price. This represents a P/EBITDA multiple of under 14 for the company based on our forecast for CSX EBITDA for the current fiscal year. Overall, CSX stock appears to be appropriately priced at its current levels and investors may be better off waiting for a dip to buy the stock for higher gains, in our view.

While CSX stock appears to be appropriately priced, the Covid-19 crisis has created many pricing discontinuities which can offer attractive trading opportunities. For example, you’ll be surprised how counter-intuitive the stock valuation is for Heartland Express vs. Altice USA. 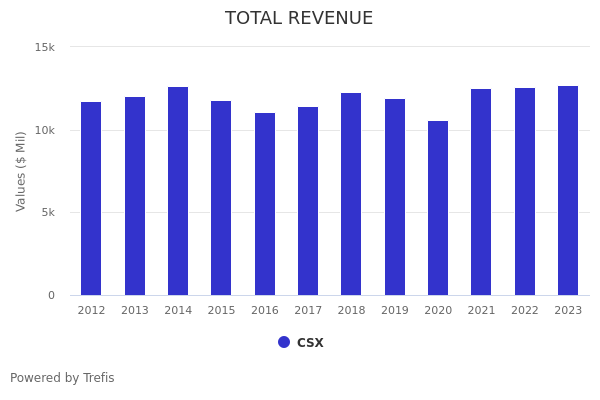 Why CSX Stock Moved: CSX Stock Has Gained 53% Since 2018 Primarily Due To Favorable Change In Revenues

What’s Next For CSX Stock Now That Railroad Strike Is Averted?

This Trucking Company Is Currently A Better Pick Over CSX Stock

This Company Is Likely To Offer Better Returns Over CSX Stock

Is There A Better Pick Over CSX Corporation Stock?

What To Expect From CSX Corporation’s Q4?

Forecast Of The Day: CSX’s Total Carloads of Coal