Chipotle Mexican Grill, Inc (NYSE:CMG) is one stock that continues to outperform the broader indices. And more importantly, it continues to outperform its restaurant peers. Barely three months into the year and the stock has returned more than 16%.  Chipotle’s strong growth comes at a time you would expect consumers to be wary of spending on premium restaurants when cheaper options are available.

On the contrary, the company’s belief in serving naturally raised meat and a focus on using only the freshest ingredients have struck a coord with consumers and is forcing other restaurant chains to remodel their strategy and supply chain in order to respond to this newly created demand. Chipotle competes mostly with the quick service and casual dining segment such as Chili’s, McDonald’s (NYSE:MCD), Burger King, Yum! Brands (NYSE:YUM) and Papa John’s, among others. We have a $393 price estimate for Chipotle, which is in line with the market price.

Most people go to Chipotle for healthy, tasty food and quick service. And consumers are ready to pay a slight premium for naturally raised meat and fresh vegetables. This was considered a risk earlier as there was too much emphasis on the final product price. But, with top-notch ingredients, the food tastes better (at least the company claims so) and is healthier. However, if you look closely there’s nothing really different about Chipotle’s menu items compared to other fast casual Tex-Mex restaurants such as  Qdoba, Pancheros Mexican Grill, and other casual dining restaurants such as Chili’s Ruby Tuesday and T.G.I. Friday’s.

Taking cues from Chipotle, an increasing number of restaurant chains are adding all-natural products to their menu. In early 2011, T.G.I. Friday’s launched a campaign stressing on a new, healthier and natural menu.

Even the McDonald’s commercial launched in December 2011 boasted the use of quality ingredients in its supply chain, and the company plans to spend a whopping $1.4 billion this year to remodel its existing restaurants to make them more upscale.

It may seem surprising that the restaurant chains are battling over which one has better ingredients, especially in a sluggish economy where you would expect the restaurants to devise more value-for-money options. But at the end it’s all good for consumers as they have more choice and more options for healthy food. 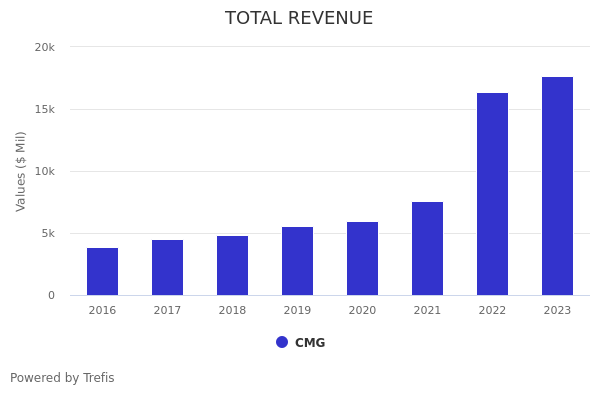 How Low Can Chipotle Mexican Grill Stock Go In A Market Crash?

With Amazon’s Stock Split Done, Are These Stocks Next?

Is Chipotle’s Stock Better Than This Peer?

Forecast Of The Day: Chipotle’s Number of Restaurants

Has Chipotle’s Stock Run Out Of Gas?

Forecast Of The Day: Chipotle’s Average Revenue Per Restaurant

Chipotle’s Earnings To Be Just Above Consensus?