In what will be the coming together of the two biggest forces in beer, Anheuser-Busch InBev (NYSE:BUD) has launched an effort to acquire the British brewer SABMiller. Rumors of this possible combination have been rife since over a year ago, but both companies have now reported that an offer might be made. If so, this deal would cost AB InBev in excess of $75 billion — the market capitalization of SABMiller before this news, and it is now 20% higher as investors await more details on the likelihood of this occurring. This would result in the creation of a new beer behemoth, which could be worth nearly $270 billion. Having both the likes of Budweiser and Miller under one roof would also mean that around 36% of the global beer volumes will be contributed by this single company (market shares of AB InBev and SABMiller were 21% and 15%, respectively, in 2014). [1]

A lot of things make this deal interesting from an investor’s perspective. This highlights AB InBev and its largest shareholders 3G Capital Partners’ strategy for the future. The Brazilian private-equity firm was behind the huge Kraft-Heinz merger earlier this year, and is known to pursue global expansion through massive mergers and acquisitions. According to a Goldman Sachs report, AB InBev spent 86% of its market capitalization on acquisitions through 2004-2007, and 103% of its value on acquisitions through 2008-2011. The recent most notable acquisition for the Belgian brewer was the 2013 takeover of the Mexican brewer Grupo Modelo — maker of the global beer brand Corona. Financing the massive SABMiller combination could significantly raise AB InBev’s debt to normalized EBITDA ratio, which rose to 2.48x as of 30 June 2015. The company’s optimal capital structure, historically, remains a net debt to EBITDA ratio of around 2x.

We have a $120 price estimate for Anheuser-Busch InBev, which is above the current market price.

Besides the financial enormity, several operational and strategic elements of this proposed deal stand out. Let’s talk about this by going over how this massive merger could affect different operating units.

AB InBev has a solid 46% market share in the U.S., but this stronghold has been weakening in the last few years. The brewer might be feeling out of luck in Anheuser’s home market, where domestic beer demand is continuously waning. That doesn’t bode well considering the biggest brands for the company are domestic beers Bud Light and Budweiser, which have consistently lost market share. 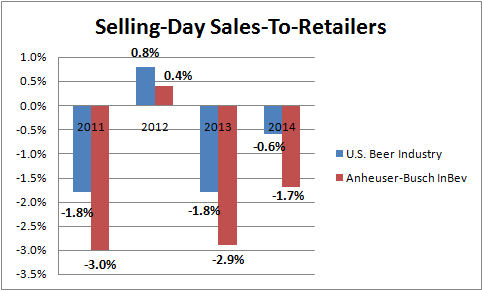 The other beer segments — imported and craft — are growing in the U.S. at the expense of domestic beer, but AB InBev hasn’t been able to gain much from this growth. Due to anti-trust issues following the Grupo Modelo acquisition, Anheuser had to give up the likes of Corona and Modelo, which are fast growing imported beer brands, to Constellation Brands in the U.S.  On the other hand, despite the acquisitions in the fast growing craft beer segment, the incremental volumes contributed are far too small to offset the larger declines of Bud Light and Budweiser. To be precise, only around 2% of AB InBev’s U.S. volume is craft beer.

So the SABMiller acquisition could mean that AB InBev is reverting to what it does best — selling domestic beer brands in bulk. This will add significant incremental volumes for the company, and the positives will lie in synergies and cost-cuts, which could increase profitability. SABMiller’s Miller Light and Miler High Life would fit right into Anheuser’s lineup of domestic beer brands.

However, given what this deal might entail, there are bound to be anti-trust issues. SABMiller has a joint venture with Molson Coors in the U.S. called MillerCoors, which, after Anheuser, is the largest beer company in the country, holding ~25% market share. Just like when Anheuser had to give away Corona in the U.S. after the Grupo Modelo acquisition due to anti-trust policies, Miller might have to give away Miller Lite and its other beer brands in the U.S., or Anheuser might have to let go of some of its own brands. The Miller-Coors partnership will be a point of conflict. In China too, SABMiller has a joint venture called CR Snow, with China Resources Enterprise. Antitrust issues might call for Anheuser to sell off SABMiller’s partnership deals in the U.S. and China. 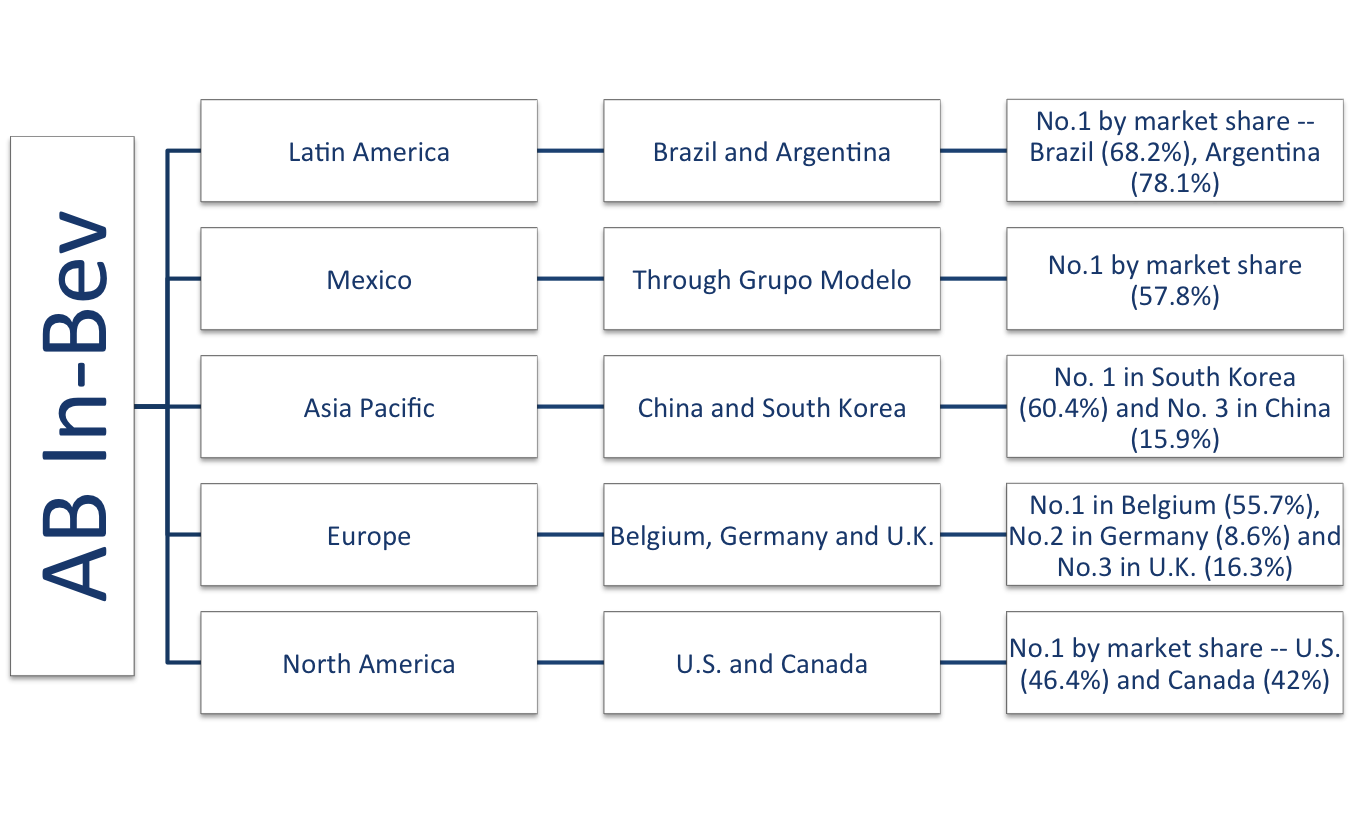 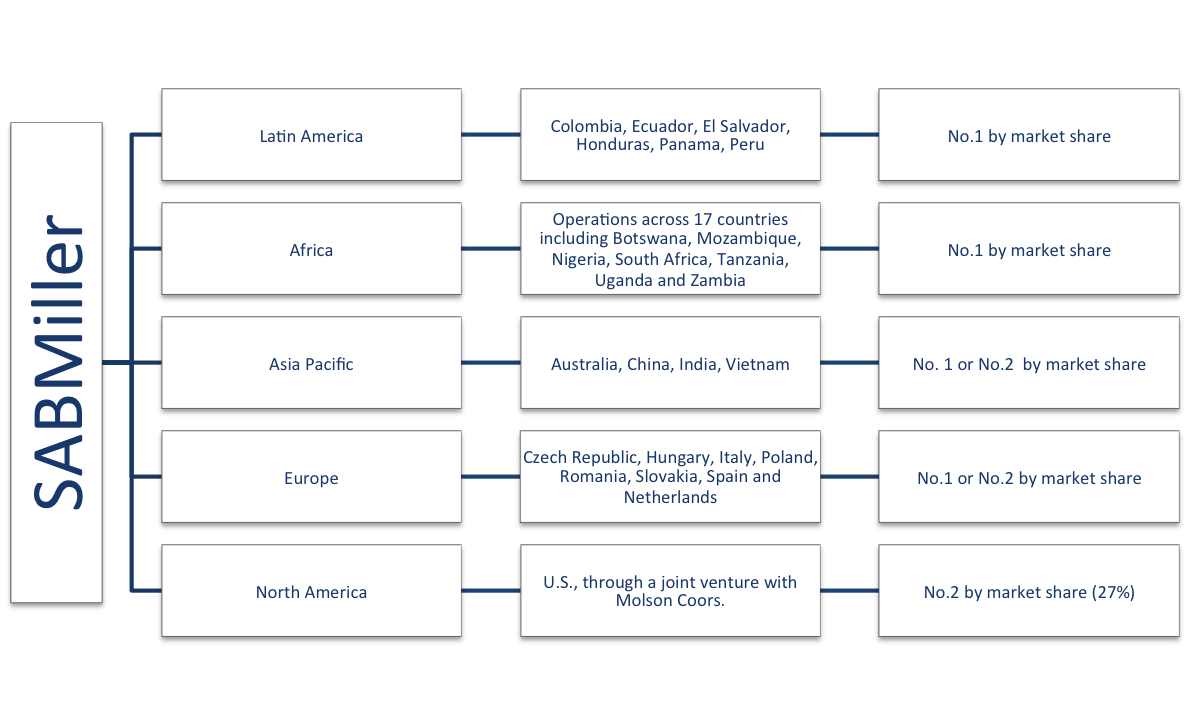 According to Euromonitor, SABMiller has 40% of the market in the Middle East and Africa, while AB InBev has just 0.6%. [2] The combination between these two companies could take AB InBev to a point of strength in Africa, from having virtually no presence. SABMiller dominates the beer industry in that region, with ~30% of its revenues coming from South Africa and the rest of the continent, in the last fiscal year ended March 2015.  SABMiller’s brewing and beverage operations in Africa are spread over 15 countries, with a further 21 covered through its associate interests in the Castel Group’s African beverage businesses and an associated undertaking in Zimbabwe.  Lager only volumes amounted to over 48 million hectoliters for SABMiller in Africa last fiscal year, and with the possible acquisition, AB InBev could improve its annual volume sales (around 459 million hectoliters) inorganically.

While the combination with SABMiller could mean expansion for Anheuser in Africa, an uncharted region for the company as of now, the latter’s Latin America beer sales could further strengthen. AB InBev already dominates most of the largest beer markets in South America, such as Brazil, Mexico, and Argentina, accounting for more than half the beer volumes in these countries. SABMiller’s possible acquisition will improve the company’s presence in countries such as Colombia and Peru, and owing to the British brewer’s premium brand positioning with brands such as Miller Light, revenues per unit volume could also rise. In fact, Colombia is the third largest market for SABMiller after the U.K. and Australia. With the inclusion of SABMiller’s beer volumes in Latin America, which stood at over 44 million hectoliters in its last fiscal year, AB InBev’s beer-only volumes in the region could rise by nearly 30%. The combination will not only provide incremental volumes, but also boost AB InBev’s prospects of growth in the fast growing premium beer segment in Latin America.

The other benefit of combining operations in Latin America will be the synergies. Cost-cuts, lowered overhead expenses, and economies of scale would enable AB InBev to extract more profits from the SABMiller unit. Latin America is already the most profitable division for Anheuser, with the operating margins for Mexico and South America standing at 39% and 43%, respectively, last year, while the figure for the overall company was 33%.  Around 40% of the brewer’s beer production capacity is concentrated in Latin America, allowing the brewer to enjoy low labor and raw material costs, and economies of scale in the region. As Latin America is also a high volume market for the company, producing beer near the end market also reduces additional costs of transportation and distribution. Anheuser-Busch InBev already boasts high industry-leading operating margins, and the combination could prove beneficial, as more profits could be squeezed out of SABMiller’s Latin America operations.

The AB InBev-SABMiller deal poses a lot of threats to other beer players, considering the gain in scale and size, and possible price-setting advantage that the new larger brewer could have. This will also result in scrutiny by governments, considering the anti-monopolistic policies in place. AB InBev and SABMiller might have to divest some of their interests in joint ventures and associates, and the former will have to look to find a way to finance this massive deal, but, nonetheless, the potential coming together of these two powerhouses in beer will alter the dynamics of the global beer market.

Anheuser-Busch InBev Or Molson Coors: Which Drink Could Make You Richer?