Boeing’s stock  (NYSE: BA) has surged more than 150% since it reached a 7-year low of $89 on March 23. In fact, the stock swelled more than 50% last week alone – starting the week at $150 to reach its current level of around $230. But keeping in mind the company’s ballooning debt and the ongoing order deferrals from commercial airliners, is the market underestimating near-term risks associated with the aircraft manufacturer?

Trefis believes that the upside potential of Boeing’s stock depends on the favorable outcome of Senate hearings on the 737 MAX’s certification next week as well as the recovery in travel demand. Therefore, we maintain our price estimate for Boeing’s stock at $183 per share, which is about 20% below the current market price. A key factor behind our belief is the erosion of shareholder value by the growing debt burden, as highlighted in our interactive dashboard analysis on Boeing’s Valuation: Expensive Or Cheap? After all, the company recently raised $25 billion of debt to tackle the coronavirus crisis – taking its total long-term debt to a staggering $58 billion or over 45% of its current market capitalization.

Revenues to decline from order deferrals and a slow production rate

Boeing is the leading manufacturer of 100+ seat aircraft for the global commercial airline industry. Apart from a strong presence in commercial aviation, the company also has a defense contracting business. Due to the grounding of MAX aircraft by the FAA last year, Boeing’s Revenues observed a 24% decline due to suspended deliveries and production breaks. As the commercial segment contributes 60% of Boeing’s total revenues, a further delay in MAX’s approval will negatively impact earnings due to growing interest expenses.

In 2020, we expect the company’s revenues to decline by 16% to $64 billion, primarily from the ongoing order deferrals by commercial airliners and a slow production rate. Before the FAA’s order, the planned production rate for the MAX aircraft stood at 57 per month. However, as per recent filings, the company is now planning a gradual increase in production rate to 31 per month by 2021 due to low demand and supply chain issues. Until the air travel demand recovers, which hinges on the containment of coronavirus spread and the development of a successful vaccine, we expect Boeing to continue to observe order delays and top-line contraction.

Moreover, the senate hearing next week could obstruct Boeing’s road to a quicker recovery. That said, the company’s Defense segment is expected to support the company through these troubled times as the U.S. government contributes 90% of the segment’s total revenues.

Margins to take a hit from growing interest expenses

Over the last three years, Boeing’s earnings have benefited from the growing air travel demand and a strong order backlog. The company’s net income increased by 114% from $4.9 billion in 2016 to $10.5 billion in 2018, supported by a 7% growth in revenues, improving operating margin, and a lower effective tax rate.

However, the coronavirus crisis has added to the MAX certification worries with a built-up of inventories and expanding corporate debt. After incurring a $636 million loss in 2019, the additional debt pile of $25 billion is expected to widen the company’s losses with a whopping $2 billion in annual interest expenses. Thus, we expect Boeing’s net income margin to slide further into negative territory in 2020. Considering a P/S multiple of 1.6, $64 billion in total revenues, and 566 million shares outstanding, we estimate Boeing’s Valuation at $183 per share. 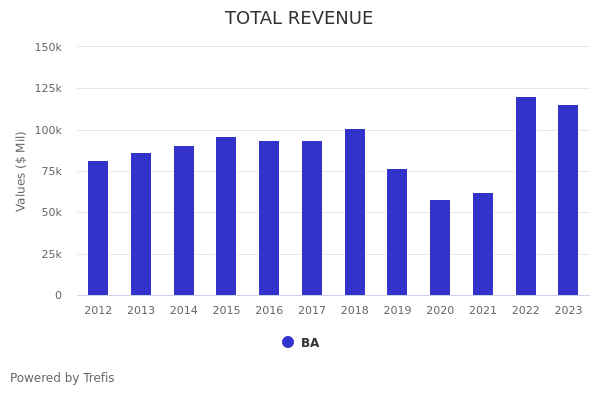 Why The Boeing Company Stock Moved: BA Stock Has Lost 45% Since 2019 Primarily Due To Unfavorable Change In Price To Sales Multiple (P/S)

The Boeing Company During 2008 Recession vs. Now: BA Stock Has 163% Upside If It Recovers To Pre-Covid Levels

What To Expect From Boeing’s Q3?

Is Boeing Stock Undervalued At $135?

Boeing Stock Is A Better Pick Over This Aerospace & Defense Company

Down 27% In A Month, Will Boeing Stock See Even Lower Levels?